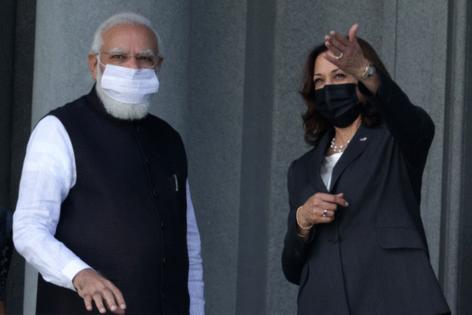 WASHINGTON — When foreign leaders come to the White House these days, Vice President Kamala Harris is often among the first officials they see.

Harris and President Joe Biden are taking a divide and conquer approach to meetings with world leaders in which Harris regularly greets and holds separate sessions with heads of government before they meet with Biden in the Oval Office when they visit Washington.

The vice president had separate meetings in her ceremonial office on the White House complex this week with British Prime Minister Boris Johnson and Indian Prime Minister Narendra Modi prior to their bilateral talks with Biden. Harris also met first with the leaders of South Korea, Japan and Germany during their visits this year.

“It is new and different,” said Barry Pavel, who was senior director for defense policy and strategy on the National Security Council under two previous presidents.

“It kills two or three birds with one stone, where she gets to start establishing these relationships more, where he can save some time in terms of protocol and continue advancing his very, very busy domestic agenda, as well as other foreign policy issues,” said Pavel, the senior vice president and director of the Scowcroft Center for Strategy and Security at the Atlantic Council.

Senior administration officials say the sequencing of the meetings usually comes down to scheduling, and they are not making an effort to put Harris in front of world leaders before those dignitaries meet with the president.

Solo meetings such as the one she had this week with Modi are meant to “dive much deeper” into issues such as democracy, climate change, human rights, global health and regional security that are important to the administration, one official said.

“She wants to meet with leaders when it works for both of their schedules, and to reinforce the agenda that this administration has across the board,” a second official added.

But it is a departure from the prior administration, when former President Donald Trump typically ushered visiting leaders into the White House through the north entrance that connects to the West Wing or the south one that leads visitors through the Executive Residence.

Lisa Curtis, the senior director for South and Central Asia at NSC in the Trump administration, said that when former Vice President Mike Pence met with world leaders, it was usually because the president was unable to meet with them.