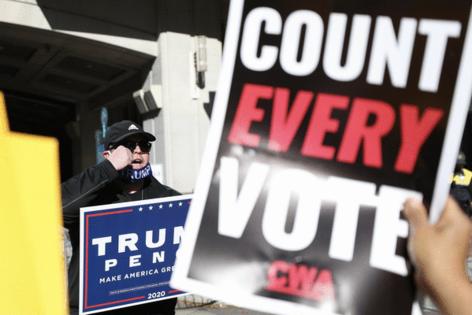 PHILADELPHIA — Republicans who control the Pennsylvania Senate began in September 2021 what they're calling a "forensic investigation" of the 2020 election more than 10 months later.

The partisan effort was controversial even before it began, following months of former President Donald Trump's lies about a stolen election and calls to investigate the results.

The Senate Republican leader has described the review as a top priority, and in September a GOP-led panel voted to subpoena millions of voters' personal information and records from Gov. Tom Wolf's administration. The Senate is planning to hire a contractor, and the review could last for months.

Joe Biden won Pennsylvania by more than 80,000 votes, almost double the margin by which Trump carried the state in 2016. Extensive litigation and post-election audits turned up no evidence of widespread fraud, a finding affirmed by Trump's own attorney general.

Lots of questions about how the investigation will work remain unanswered. Here's what we know — and don't know — about it.

Elections are complex and never perfect, and audits are one way officials verify the legitimacy of the results, identify issues, and improve the electoral system. Generally speaking, election audits focus on one of two things: checking the results to confirm whether votes were tallied accurately, or reviewing how the election was run, including what policies and procedures were followed.

Audits can help identify issues with or weaknesses in the system, with the goal of determining whether things were run well enough that the election was free and fair — and the votes accurately tallied so the winner was certified correctly.

A recount, for example, can be considered a type of audit, checking the accuracy of the vote count.

"The reason why you perform an audit in the first place is you want to have confidence in the outcome," said Trey Grayson, a Republican and Kentucky's former top elections official.