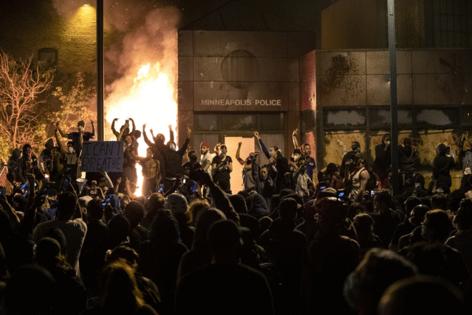 The state agency also plans to ask a judge to issue a protective order that would stop attorneys for Minnesota's chapter of the American Civil Liberties Union from making statements to the press about their lawsuit, which alleges that troopers targeted and assaulted journalists during the unrest in violation of the constitution.

The brief comes in response to allegations leveled by the ACLU earlier this month. In court documents and a news release, attorneys for the ACLU cited testimony from State Patrol Maj. Joseph Dwyer as evidence of the destruction of e-mails and text messages. In a transcript, Dwyer said he and likely a "vast majority of the agency" deleted the records after the riots.

Lawyers for the state now say Dwyer was only speculating about the other officers in his testimony. They acknowledge Dwyer did permanently delete text messages, but the attorneys say the troopers only "soft deleted" the e-mails, which means they still exist. Knowing the ACLU's lawsuit had been filed, the state placed a "litigation hold" on records starting June 8 to ensure retention of "e-mail and calendar entries for all 596 troopers from May 11, 2020 to the present," according to the opposition brief filed Wednesday. The state has also retained "various text messages" from other troopers pertaining to the unrest, the court document says.

The ACLU's suit, filed on June 3, 2020, alleges that the Minneapolis Police Department and the State Patrol used unnecessary and excessive force to suppress First Amendment rights to cover the unrest last summer. It is one of several lawsuits filed against law enforcement for alleged constitutional violations in use of force last summer.

In a July 28 pretrial hearing, Dwyer said it was "standard practice" to purge communiques after a major event.

"You just decided, shortly after the George Floyd protests, this would be a good time to clean out my inbox?" asked ACLU attorney Kevin Riach.

Dwyer answered in the affirmative.

He said it's up to each individual on when they want to delete these records, and it's a "recommended practice" to purge after a major event.

"Are you required to keep e-mail correspondence for a certain period of time?" asked Riach.

Earlier this month, the ACLU said this purge "makes it nearly impossible to track the State Patrol's behavior, apparently by design."

"The purge was neither accidental, automated, nor routine," said ACLU attorneys, in a court motion that asks a judge to order the State Patrol to cease attacks on journalists who are covering protests. "The purge did not happen because of a file destruction or retention policy. No one reviewed the purged communications before they were deleted to determine whether the materials were relevant to this litigation."

Lawyers for the Department of Public Safety say the ACLU is "relying heavily on inflammatory and unsupported allegations" to make a "red herring" case of spoiled evidence. The State Patrol retained a "massive" amount of digital and hard-copy records related to its riot response, including for arrests, dispatches and radio transmissions and use of force, according to the court document.

"Despite neither knowing about this information nor inquiring into it, Plaintiffs filed their misleading allegations and repeated them in the media," the brief states.

A spokesman for the Department of Public Safety would not comment beyond the court documents, including on Dwyer's belief that many troopers deleted text messages, citing ongoing litigation. A spokeswoman for the ACLU said their team of attorneys plans to file a response to these allegations next week.