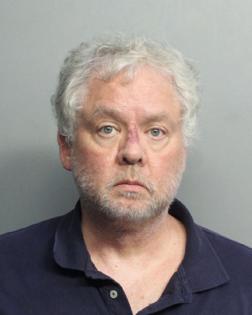 MIAMI — Gentry Fry says that he’s suffered childhood post-traumatic stress disorder, all stemming from being molested by a neighbor in his Southwest Miami-Dade neighborhood in the late 1970s. He’s spent decades battling addiction to food and alcohol, he says, and has been sober for four years.

Now 49, he recently Googled that neighbor, then a medical student named Thomas Clayton Wyatt. He found an online profile of Wyatt, who was now a graying psychiatrist in a small town in Georgia. An online reviewer wrote she did not trust the doctor “because he was inappropriate with my son.”

“When I saw that, suddenly I felt a sense of panic and terror. It pointed out that he likely continued to sexually abuse children over this whole time,” Fry said.

That, Fry says, spurred him to reach out to two lifelong friends from the neighborhood who he says were also molested. Together, they reported the case to Miami-Dade police in August.

Wyatt, 65, has now been charged in Miami-Dade County with two counts of sexual battery on a minor, stemming from the alleged attack on one of Fry’s friends. Wyatt was extradited from Chatsworth, Georgia, last week, and is now preparing for a bail hearing Oct. 1. He has pleaded not guilty.

Wyatt’s defense attorney, Sam Rabin, said Wyatt has enjoyed a “distinguished career with no other reports of wrongdoing other than these 40-year-old incidents.”

“I’ve got to wait to see the evidence but obviously, there are a number of significant issues with a case that’s 40 years old and with no records of reports,” Rabin said.

According to an arrest warrant, the victim, identified by his initial. J.S., was about 6 years old at the time of the attack, which took place sometime between 1978 and 1980. He reported that Wyatt, then in his 20s, took him to his home in Southwest Miami-Dade, showed him pornographic magazines and then sexually assaulted him. It happened several times over the months, police said.

The warrant notes the similar allegations from the other two men, including Fry, who says he was also drugged when his attack happened.

Fry, a graduate of Coral Gables High in 1990, says the trauma of the sexual attack led him into a life of overeating, drug and alcohol use and homelessness. “My life has been mostly dark moments,” Fry said.

He is now a freelance writer and independent filmmaker who still struggles to find work. But he has also lost 180 pounds.

Fry said he is coming forward because he and the two other victims want to publicize the case, with the hope that other victims might come forward. They want Wyatt held behind bars before his trial.

“This is frightening news for us. We feel the defendant should remain behind bars until his trial. As his actual victims, we worry that there might be others,” he said.