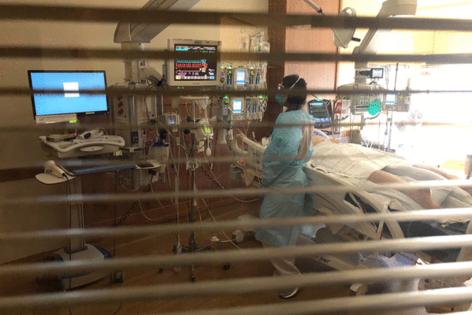 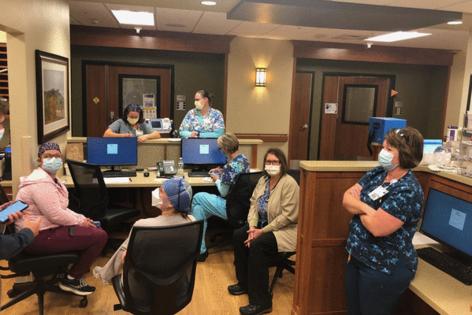 BILLINGS, Mont. — Nurses fill the hospital room to turn a patient from his stomach to his back. The ventilator forcing air into him is most effective when he’s on his stomach, so he is in that position most hours of the day, sedated and paralyzed by drugs.

Lying on his stomach all those hours has produced sores on his face, and one nurse dabs at the wounds. The dark lesions are insignificant given his current state, but she continues just the same, gently, soothingly, appearing to whisper to him as she works.

The man has been a patient at Billings Clinic for nearly a month, most of that time in the hospital’s intensive care unit. He is among other patients, room after room of them, with the same grim tubes inserted down their throats. They have COVID-19 — the vast majority unvaccinated against the virus, the hospital says. Visitors generally aren’t permitted in these rooms, but the man’s mother comes most days to gaze through a glass window for the allowed 15 minutes.

This all happened Friday. He was dead, at age 24, by Sunday morning.

The hospital’s morgue cart arrived at the ICU — as it frequently has these days — then the room was sterilized, another patient took the man’s place, and the cycle began again. In the past week, 14 people have died of COVID-19 here, the state’s largest hospital.

“I do feel a little hopeless,” said Christy Baxter, the hospital’s director of critical care.

The situation has played out in hospitals around the nation since 2020. But now Montana is a national hot spot for COVID-19 infections, recording the highest percentage increase in new cases over the past seven days. The state announced 1,209 new cases last Friday, and Yellowstone County, home to Billings Clinic, is seeing the worst of it. Last week, the county had 2,329 active cases, more than the next two counties combined.

What’s different from the early scenes of the pandemic is the public’s response. Not so long ago, the cheers of community support could be heard from the hospital parking lot. Now, tensions are so strained that Billings Clinic is printing signs for its hallways, asking that the staff members not be mistreated.

The ICU here has space for 28 patients but last Friday was operating at 160% capacity, Baxter said. To handle the overflow, nurses elsewhere provide care beyond their training as covid patients fill other parts of the hospital. In the lobby of the emergency department, rooms roughly 6 feet by 6 feet have been fashioned with makeshift plastic walls. Ten members of the Montana Army National Guard arrived last week to help however they can. Hospital staffers volunteer to sit with dying patients. Beds line hallways.

“The problem is,” said Brad Von Bergen, the hospital’s ER manager, “we are running out of hallways.”