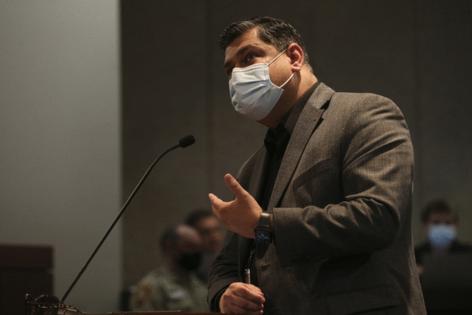 CLAYTON, Mo. — The St. Louis County Council on Tuesday delayed a vote to confirm Dr. Faisal Khan as county health director until after they meet with him to discuss a possible new mask mandate as well as fallout from a contentious public meeting in July where he lost his composure.

Khan, as acting health director, appeared before the council on July 27 to answer questions about a public health order issued the day before. In the lobby outside the council chamber, he gave an anti-mask protester the middle finger as he was leaving the county building.

Khan admitted to the act, but wrote in a blistering letter that that he'd been subjected to racist and xenophobic slurs during his testimony and was "shoulder-bumped" by members of the audience as he left the chambers. The letter, which sharply criticized Councilman Tim Fitch, R-3rd District, Council Chair Rita Heard Days, D-1st District, and others, drew national notice, including from PBS's "NewsHour," CNN and MSNBC.

Under council questioning last week, County Executive Sam Page said he had reprimanded Khan for the action, but declined to release more details about the investigation, saying County Counselor Beth Orwick's office advised it was a personnel matter and closed record.

On Monday, Khan wrote a letter to the council asking to meet "as soon as possible" to discuss a new mask order, just after a St. Louis County Circuit judge upheld an injunction barring the county from enforcing the July 26 mask order.

During a committee hearing Tuesday, Fitch and Councilman Ernie Trakas, R-6th District, asked Days to delay a vote to confirm Khan and instead schedule a meeting with Page's office to discuss the incident, even if it's done behind closed doors.

Councilwomen Lisa Clancy, D-5th District, and Kelli Dunaway, D-2nd District, agreed to withdraw a motion to confirm Khan's nomination, but only if at the same meeting the council first met in open session to hear testimony from Khan for the need for a new mask order.

Khan on Tuesday did not respond to a Post-Dispatch request for comment.

A council vote on whether to confirm Khan would not be binding because it involves a political appointment. Page has said that he plans for Khan to continue to serve as acting director of the department.

Page spokesman Doug Moore on Tuesday declined to confirm whether Page's office would further discuss the investigation, referring to Page's comments last week about not discussing a personnel matter.

"We will follow the advice of the county counselor when discussing employee personnel issues," Moore said.

(Erin Heffernan of the Post-Dispatch contributed to this report.)