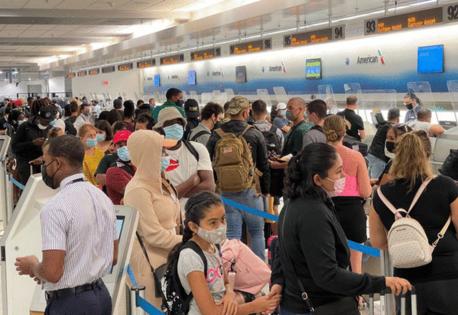 The federal regulator charged with keeping the nation’s airways safe met Tuesday with representatives of U.S. passenger airlines and urged them to take more aggressive steps to reduce the incidents of unruly passenger behavior that have been on the rise during the Covid-19 pandemic.

The Federal Aviation Administration said its senior leaders initiated the meeting, scheduled to be the first of three get togethers between regulators and aviation stakeholders on the topic, because it believes “additional action by the airlines and all aviation stakeholders is necessary to stop the unsafe behavior” despite the agency’s launch of a previous public awareness campaign.

The agency said in a statement afterward that it “asked the airlines to commit to take more action and tell the FAA in a week the additional steps they will implement during the next month to curb unruly behavior.”

Attendees at the meeting included Airlines for America, Regional Airline Association, the National Air Carrier Association and some of their member airlines.

The FAA said future meetings on the subject of unruly passengers will include representatives from airports and labor.

The Biden administration recently announced plans to double financial penalties for airline passengers who violate federal rules requiring masks on commercial airplanes is part of the government’s latest effort to slow the spread of the delta variant of the coronavirus.

Reports of disruptive passengers reached 4,385 this year as of Tuesday, including 3,199 that were mask-related incidents and 789 that were deemed serious enough to warrant investigations, according to the FAA. Even with four months remaining in 2021, such inquiries already number more than twice as many as any previous year.

A large number stemmed from resentment over federal mask mandates, fatigue over the Covid-19 pandemic and deepening political divisions, making some jet cabins a proxy battleground in the so-called culture wars.