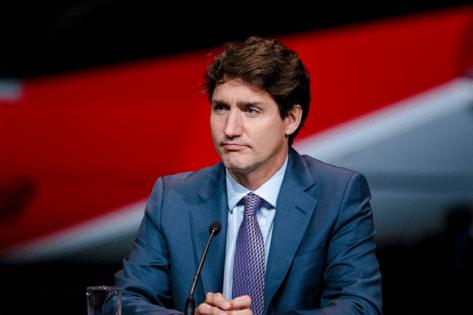 CTV News and the Canadian Broadcasting Corp. projected his governing Liberal Party will win a plurality of seats and form a minority government.

The projected result would leave Trudeau in power to pursue the most left-leaning agenda the country has seen in at least a generation. Even with a minority, the early results suggest the Liberals will have a stable government, which will allow Trudeau to continue with a big-spending agenda that’s largely backed by his government’s most likely partner, the left-leaning New Democratic Party. Both parties also have campaigned, to varying degrees, on higher taxes for businesses and stricter emission rules for the oil and gas sector.

The Bloc Quebecois, a party that runs candidates only in the French-speaking province of Quebec, was elected or leading in 29 ridings, and the NDP was also ahead in 29. The Green Party was leading in two.

The Liberal victory is a historic milestone for Trudeau, marking only the eighth time a Canadian leader has won three successive elections. Trudeau’s father, Pierre, also did it. It also represents a comeback of sorts for Trudeau, whose party was trailing in the polls midway through the five-week campaign.

Still, failure to secure a majority is a disappointing result for the Liberals. It’s the second time voters have denied this prime minister full control of the legislature, limiting his freedom to take big risks or govern unilaterally.

As a share of the vote, polls show the Liberals at 32.3% support and the Conservatives at 34.1% with 53% of the polls reporting.

Minority governments have become familiar to Canadians. The past seven elections have now produced five minority governments, lasting on average about two years. They’re popular because they require the participation of several parties to make laws.

But there’s a downside. Minority parliaments keep parties on constant campaign footing and give them less scope to consider long-term issues. In practice, that means politicians are wary of tackling big problems like Canada’s sagging competitiveness or slow transition toward a low-carbon economy.