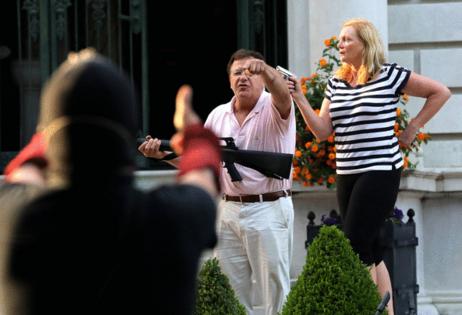 The case, filed by the state Office of Chief Disciplinary Counsel on Thursday with the Missouri Supreme Court, follows McCloskey’s conviction in June of fourth-degree assault connected to his waving of a rifle at racial justice protesters last summer.

Republicans saw his action as an example of the “castle doctrine,” which allows property owners to defend their homes with firearms.

Gov. Mike Parson, a Republican, pardoned McCloskey and his wife, Patricia, but the new legal fight shows the St. Louis attorney could still face consequences, including suspension of his law license for up to six months.

A similar motion by the court’s disciplinary officer was filed against Patricia McCloskey, who also is an attorney.

The incident that led to their guilty pleas came in June 2020 following the death of George Floyd in Minneapolis. As a group of protesters walked through the Central West End neighborhood of St. Louis, the McCloskeys stood outside their home on Portland Place with a rifle and a pistol.

No shots were fired.

The letter from Chief Disciplinary Counsel Alan Pratzel, who is in charge of attorney discipline in Missouri, said the duo “admitted committing a criminal act that shows indifference to public safety and involved moral turpitude.”

“When (McCloskey) pled guilty, he admitted the purposeful criminal conduct of placing others in apprehension of physical harm by waving his automatic rifle in their direction,” Pratzel wrote.

“Finally, by pleading guilty, (McCloskey) admitted that his purposeful conduct was not justified,” the request to the Supreme Court notes.

In the aftermath of the incident, McCloskey launched a bid for Missouri’s U.S. Senate seat being vacated by Republican Roy Blunt.

At the Missouri State Fair in August, following his pardon, he shook hands with the governor and thanked him for the action.

But, as Pratzel wrote in his motion to the court, “He admitted guilt in court and remains guilty.”

The motion for suspension also notes that McCloskey told members of the news media that he would commit the same crime under the same circumstances.

That, said Pratzel, should be factored in by the seven-member court.

“Respondent’s public statements aggravate because they indicate his refusal to acknowledge wrongdoing and demonstrate his lack of respect for the judicial process that he had recently participated in,” the motion says.

McCloskey is among five well-known GOP candidates running for Senate.