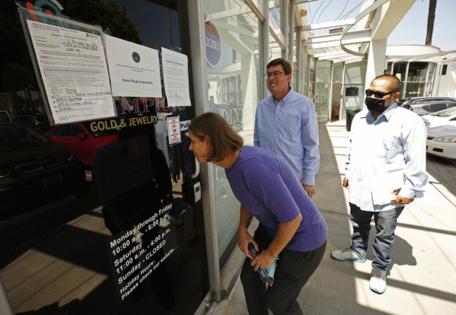 After the FBI seized Joseph Ruiz's life savings during a raid on a safe deposit box business in Beverly Hills, the unemployed chef went to court to retrieve his $57,000. A judge ordered the government to tell Ruiz why it was trying to confiscate the money.

It came from drug trafficking, an FBI agent responded in court papers.

Ruiz's income was too low for him to have that much money, and his side business selling bongs made from liquor bottles suggested he was an unlicensed pot dealer, the agent wrote. The FBI also said a dog had smelled unspecified drugs on Ruiz's cash.

The FBI was wrong. When Ruiz produced records showing the source of his money was legitimate, the government dropped its false accusation and returned his money.

Ruiz is one of roughly 800 people whose money and valuables the FBI seized from safe deposit boxes they rented at the U.S. Private Vaults store in a strip mall on Olympic Boulevard.

Federal agents had suspected for years that criminals were stashing loot there, and they assert that's exactly what they found. The government is trying to confiscate $86 million in cash and a stockpile of jewelry, rare coins and precious metals taken from about half of the boxes.

But six months after the raid, the FBI and U.S. attorney's office in Los Angeles have produced no evidence of criminal wrongdoing by the vast majority of box holders whose belongings the government is trying to keep.

About 300 of the box holders are contesting the attempted confiscation. Ruiz and 65 others have filed court claims saying the dragnet forfeiture operation is unconstitutional.

"It was a complete violation of my privacy," Ruiz said. "They tried to discredit my character."

Prosecutors, so far, have outlined past criminal convictions or pending charges against 11 box holders to justify the forfeitures. But in several other cases, court records show, the government's rationale for claiming that the money and property it seized was tied to crime is no stronger than it was against Ruiz.