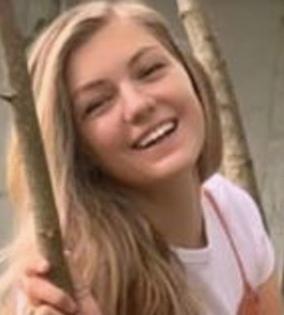 A body discovered in rural Wyoming is consistent with the description of Gabby Petito, the FBI said during a news conference Sunday.

Officials said the identity of the body could not be confirmed until a full forensic report is conducted.

A cause of death has not been determined. Petito’s family was notified of the body’s discovery, the FBI said.

Investigators on the case say Petito’s family contends it last spoke with her in August, when the 22-year-old was visiting Grand Teton National Park.

Dozens of Florida law enforcement officials on Sunday began a second day of combing through a 24,000-square-acre wildlife park on the Gulf Coast in search of Petito’s boyfriend, Brian Laundrie, whose family has said they last saw on Tuesday.

Police are calling Laundrie a “person of interest” in the disappearance of Petito. The two embarked on a cross-country road trip in July, but Laundrie, 23, returned home alone on Sept. 1.

“He is not wanted for a crime,” North Port, Florida, police have said.

Social media posts revealed Petito and Laudrie, who began there trip from Long Island, had planned to arrive in Oregon in October.

The lawsuit accuses the ...Read More