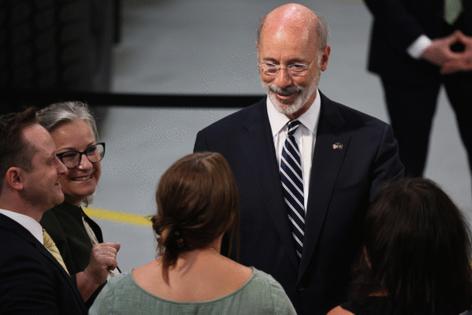 At least three lawsuits have been filed challenging the order by Gov. Tom Wolf's administration, which took effect last week and has generated protests in some school communities.

One case alleges that two children "could not breathe while wearing a mask," and that another family believes "wearing masks interferes with their religious duty to spread the word of God and forces them to participate in a satanic ritual."

Legal experts say they don't expect the claims to succeed; courts have long upheld the authority of states to regulate public health. But they also didn't rule out the prospect of surprise rulings.

"COVID fatigue applies to everybody, including judges," said Scott Burris, director of the Center for Public Health Law Research at Temple University Beasley School of Law. Still, he said, "courts remain places where facts matter." He and others said it would be hard for a judge to find that a mask mandate was outside the bounds of what Pennsylvania's public health law allows.

Here's a look at the cases:

One challenge was brought by the top Republican in the Pennsylvania Senate. Backed by a conservative group that has challenged the 2020 election results, Senate President Pro Tempore Jake Corman says he signed on as a Bellefonte Area School District parent, not a legislator.

Other plaintiffs in the same case include fellow Republican State Rep. Jesse Topper of Bedford County, other parents, and two Christian schools. Together they contend acting Health Secretary Alison Beam didn't have the authority to issue the order because no state rule or regulation exists that provides for a mask mandate. A hearing on their claim scheduled for Thursday was continued without a new date.

In a second case filed against Beam in Commonwealth Court, parents in Bucks County and elsewhere also accuse her of overstepping her authority — in particular, in counties that have their own health departments.

A third case, filed in federal court by parents against the Tredyffrin/Easttown School District, argues that not only did Wolf's administration not have the right to order masking, but neither did the Chester County district, which had announced its own mask requirement prior to the state mandate.