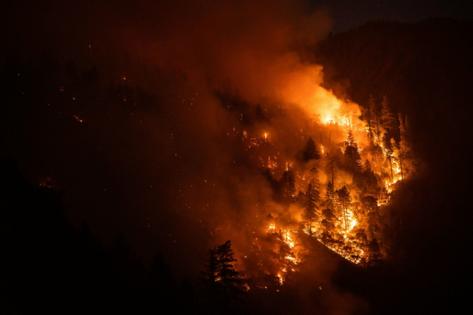 The Monument and McFarland fires were two of at least nine ignited in the Shasta-Trinity National Forest as thunderstorms rolled through Thursday to Saturday.

The Trinity County Sheriff's Office issued evacuation warnings for the communities of Big Bar and Del Loma on both sides of the Trinity River at about 10 p.m. Saturday as the Monument fire grew rapidly, threatening an estimated 22 homes. An evacuation warning for the Wildwood neighborhood issued Friday morning due to the McFarland fire remained in place, with about 16 homes at risk.

The fires were burning amid historically dry conditions and a series of heat waves linked to human-caused climate change. It was the area's third-warmest July on record, with the average high in Ukiah over 100 degrees, according to the National Weather Service. Temperatures there remained about five degrees above normal Sunday.

"We're seeing growth that is really extreme on all of these fires," said Adrienne Freeman, public information officer for the national forest. "We talk a lot about the probability of ignition, and what that means is: If a source hits vegetation, how likely is it to start a fire?"

The probability, which is based on factors including fuel moisture and wind, has consistently been in the 90th percentile, she said.

"Lightning, cigarettes, hot engines — if there's a heat source," she said, "the likelihood that it's going to start a fire is extremely high."

The Monument fire was burning on the south side of the Trinity River through low-elevation brush and timber in extremely steep terrain. Infrared mapping put the fire at about 800 acres Saturday night, and it had grown to about 1,000 acres by Sunday morning, according to authorities, who reported 0% containment.

There are no roads that lead to the area, so officials mounted an aggressive initial attack with aircraft and smokejumpers — specially trained firefighters who are dropped in by parachute — Freeman said.

The fire was progressing to the east, pushed by the steep river canyon's strong daily wind pattern, with winds that blow upslope with the heating of the day and then downslope at night, Freeman said. Although it was burning in the scar of the 2008 Cedar fire, that took place too long ago to have any ameliorating effect on its behavior, Freeman said.

California Gov. Gavin Newsom’s recall victory aside, Democrats have had a difficult few weeks and now find themselves in an increasingly tricky political position.