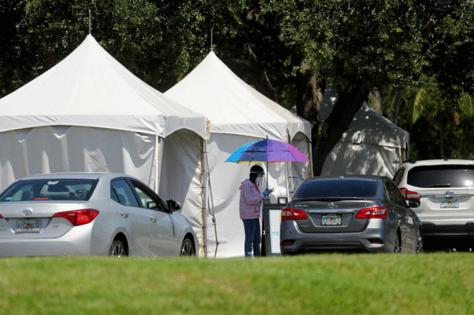 The state reported 21,683 new cases, a big jump over the previous one-day record, 19,334, set during the post-holiday surge in early January.

The number of daily deaths, already on an upward trajectory in July, stood at 108 in Saturday’s report, the highest number since the Florida Department of Health reported 148 deaths on July 22. Florida’s seven-day average now stands at 15,817 cases, the second-highest average ever reported. Only Jan. 8′s average of 17,568 cases was higher.

Florida’s seven-day average of reported COVID-19 deaths inched up to 58, the highest level since 63 on June 7.

The test positivity rate, a statistic that may be more significant than the raw number of new cases, was at 18.82 percent on Thursday. No data for July 30 was available on the CDC’s website.

After months of optimism generated by the wide distribution of vaccines, the COVID-19 picture in the United States has quickly darkened. Case numbers have skyrocketed, driven by infections among unvaccinated people and the highly contagious delta variant, with hospitals reporting sharp increases in admissions.

Miami-Dade and Broward counties admitted the most COVID-19 patients to hospitals of any counties in the U.S. in the last seven days, with more than 800 patients each, according to a White House report on Friday.