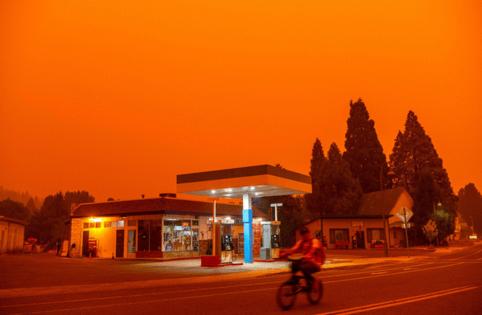 SAN JOSE, Calif. — The Dixie fire surpassed 240,000 acres total burned Saturday in remote Northern California as crews braced for hot weather and the threat of thunderstorms through the weekend.

The fire — which started in mid-July about 10 miles northeast of Paradise — is the state’s largest so far this year and now covers 240,795 acres in Butte, Plumas and Tehama counties, according to Cal Fire. It was about 24% contained as of Saturday morning.

Starting Saturday afternoon and through Sunday, temperatures ranging into the 90s were expected to wash over the region, along with potential thunderstorms bringing erratic winds and spotty rain, the National Weather Service said.

“This will be the hottest weather we’ll see in this area — that’s the biggest concern,” said NWS meteorologist Eric Kurth. The thunderstorms, however, are less predictable: “There could be some local periods of heavy rain, but it’s hard to say how that might impact the fire.”

Throughout the week, firefighters have created fire lines along the blaze’s western flank, including the shore of Lake Almanor and the Jonesville and Butte Meadows areas. By strategically burning fuels outside the fire’s main body, the flames have less vegetation to eat up as they expand — therefore helping to protect populated communities beyond the fire line.

“Less fuels means less opportunity to get up the line,” Wink said. “Those operations are going good.”

All along the Highway 70 corridor, utility companies, Caltrans and tree removal workers planned to spend Saturday clearing debris from roads and assessing damage, Wink said. Residents may also notice big, billowing smoke clouds as more fuels within the blaze’s interior burn off, but he emphasized that doesn’t mean it is spreading significantly outward.

The Plumas County Sheriff’s Office reduced a mandatory warning for Lake Almanor’s east and west shores to a warning, along with various communities west of the Highway 89 and 36 junction. Pratville remained under an evacuation order, the office said; full details are available here. The Butte County Sheriff’s Office meanwhile lifted the warning for the Pulga and East Concow areas along the fire’s southwestern corner Saturday, but Butte Meadows, Jonesville and Lake Philbrook areas remained under an evacuation order.

To the east, meanwhile, thunderstorms late this week have already contributed to unpredictable spread. As winds up to 40 mph surfaced near Rush Creek Road in the Twain area, previously quiet flames “woke up” and gained more acreage into the burn scar of the 2012 Chips Fire, said CalFire Operations Section Chief John Goss.

Containment lines were holding along Emigrant Road, above Taylorsville, and in the Keddie area to Butterfly Valley, Hambly Ravine and Bean Hill. Firefighters managed to finish a burning operation near Emigrant about 30 minutes before new winds arrived Thursday, helping to keep Taylorsville out of harm’s way, Goss said.

Although crews had a reprieve Friday, winds of about 20-30 mph were expected to crop up again Saturday and Sunday. Throughout next week, temperatures will gradually decrease by several degrees — but without the promise of storms, the already-dry humidity levels could go down even more.

Still, Goss ended on a small note of encouragement: In the Bucks Lake area, which had been threatened earlier this week, crews have contained the fire’s edge and entered the “patrol status” stage of firefighting.

“We’re at a point where we’re starting to pull all the excess hoes and pumps to get them back to the fire camp to get refurbished and put back on the line if needed,” Goss said.