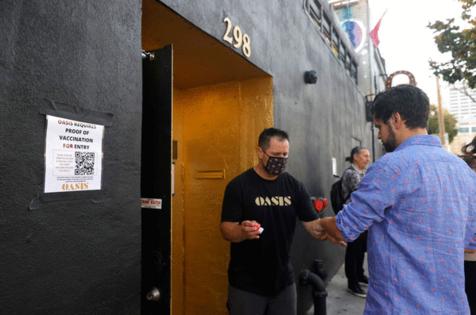 President Joe Biden and other political leaders are playing catch-up as they push for more vaccine mandates: The proprietors of Provincetown, Massachusetts, are way ahead of them.

In the rainbow-festooned resort town at Cape Cod’s tip, patrons already need vaccine cards to watch drag shows at Pilgrim House; to attend the afternoon tea dances at the Boatslip Beach Club; to get a beer at the Provincetown Brewing Company; even to get a facial at the Jonathan Williams Salon and Spa.

Provincetown, unhappy home to one of the first major delta variant outbreaks in a highly vaccinated U.S. population, imposed an indoor mask mandate this week, days before Washington, D.C., and Kansas City, Missouri. Its business owners are at the vanguard of private efforts to build back better COVID defenses, as Biden announced his latest plan to boost the nation’s sputtering vaccination campaign.

“I don’t control local government, but I do control my business,” said Ken Horgan, who runs Pilgrim House, which has begun requiring proof of vaccination of all guests at its hotel, restaurants and 180-seat drag shows. At latest count, the Provincetown cluster numbers more than 880 total cases in a town with a summer population of about 60,000.

Grassroots efforts to require proof of vaccination have been emerging for weeks at food and entertainment spots around the country, from restaurants in Atlanta to the just-announced Gramercy Tavern in New York City. But the rise of the delta variant is adding momentum, particularly in spots with large gay populations such as Provincetown and San Francisco.

As of Thursday, more than 500 San Francisco bars were requiring vaccination or a recent negative COVID test. In Provincetown, it’s getting hard to find a nightclub that doesn’t require a vaccine card.

Pushback has been minimal, said Horgan: A half-dozen or so refunds had to be issued to guests who canceled, plus he had to endure some nasty comments. But, “95% of the people are not only willing, but gleeful to show proof,” he said, adding that many in Provincetown are angry at unvaccinated visitors.

The message is simple, he said: “If there’s a vaccine out there, get vaccinated or don’t come here.”

Memories of AIDS-epidemic suffering and death fuel the push for vaccination requirements in LGBTQ venues. At Eagle NYC, a gay bar in Chelsea requiring vaccine proof, co-owner Derek Danton said one man protested outside that the rule was akin to asking people for proof of HIV negativity during the AIDS crisis.

MYRTLE BEACH, S.C. — On Monday, Leaders of the Horry County Republican Party gathered in the multipurpose room at the Base Recreation Center in Myrtle Beach for one of the local GOP’s monthly meetings.

The party has ...Read More

LOS ANGELES — Hate crimes increased by 35% in Orange County in 2020, the largest annual jump in at least a decade, according to a new report.

Hate-motivated attacks that did not rise to the level of a crime — known as...Read More