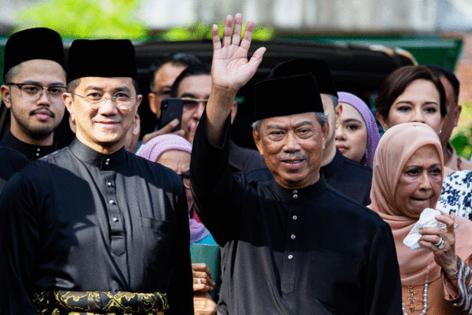 In a rare rebuke, King Sultan Abdullah Sultan Ahmad said in a statement he had yet to consent to canceling laws that were imposed without legislative approval throughout Malaysia’s seven-month emergency.

The statement contradicts Law Minister Takiyuddin Hassan’s remarks in parliament that the emergency laws had been revoked as of July 21, ahead of the Aug. 1 expiration, making debate on the issue unnecessary. His comments prompted protests from opposition lawmakers.

The rushed move to cancel the laws as well as the conflicting announcement to the parliament “undermines the functions and powers of His Majesty as the Head of State,” said the palace in a statement.

Parliament erupted following the king’s intervention, with opposition leader Anwar Ibrahim urging the prime minister to take responsibility and step down. At a news briefing later, Anwar said he had submitted a motion for a no-confidence vote against Muhyiddin to the speaker’s office.

The United Malays National Organization, the largest party in the ruling coalition, ordered its MPs to withdraw support for Muhyiddin. The party had initially allowed lawmakers to vote according to their conscience. Malaysia’s deputy minister, health minister, and vaccine coordinating minister are among UMNO’s members.

The perceived disrespect of institutions and misleading parliament further undermines the legitimacy of a government in crisis, Bridget Welsh, Honorary Research Associate with the University of Nottingham Asia Research Institute Malaysia, wrote on Twitter.

“Public calls for resignation growing. Key question is if resignations do happen what comes next,” Welsh wrote. “Malaysia needs leaders that are addressing the crisis rather than are the crisis.”

The government still has the support of more than 110 MPs, Deputy Prime Minister Ismail Sabri Yaakob said in a statement. There are 220 members in the lower house of parliament.

The Prime Minister’s Office in a statement said “the government is of the view that all the actions taken are in accordance with the provisions of the law and the constitution.” Muhyiddin appeared before the King on Tuesday to explain the situation, the statement said, adding that Takiyuddin told lawmakers July 26 that the Cabinet has decided to revoke the emergency laws.

The emergency handed Muhyiddin wide-ranging powers to tackle the pandemic, including shuttering parliament and introducing ordinances without legislative approval. Still, new COVID-19 cases have more than tripled to a record since it was imposed on Jan. 12, with confirmed cases breaching the 1 million mark last Sunday.

Public anger is intensifying as much of the country remains under lockdown, and the recent virus restrictions, dubbed the “Movement Control Order 3.0,” cost the economy 1.1 billion ringgit ($260 million) a day, Finance Minister Tenting Zafrul Abdul Aziz said in parliament on Thursday.

Malaysia’s parliament sat for the first time this year on Monday, following pressure from the monarch. The five-day session was meant to provide lawmakers an opportunity to grill Muhyiddin over his government’s handling of the pandemic and the economy.

Thursday’s sitting was temporarily adjourned in the first half of the day after Anwar read out the king’s statement to the house and demanded accountability. It was further delayed after the Health Ministry ordered a screening for all lawmakers following the detection of two COVID-19 positive cases in parliament. Parliament is set to reconvene Monday.

After staying in the background of national politics for decades, Malaysia’s monarch began moving center stage last year to fill a vacuum created following the abrupt resignation of Mahathir Mohamad as premier. The king resolved a week-long impasse by tapping Muhyiddin to become prime minister without a parliamentary vote.

In June, the king met politicians and royal leaders to discuss the worsening pandemic and called on parliament to reconvene as soon as possible.