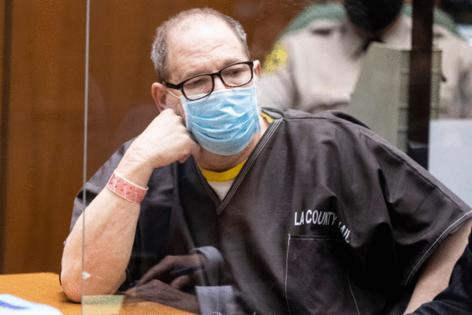 Weinstein appeared in a Los Angeles courtroom in a wheelchair and wrinkled brown jail uniform. After a deputy removed his handcuffs for the courtroom cameras, he pulled off his face mask and was quickly ordered to put it back on.

Weinstein then donned some shiny black-rimmed glasses and listened intently to arguments before the judge rejected Count 5 in the indictment unsealed last week involving five Jane Does.

Weinstein’s defense lawyer, Alan Jackson, argued the count related to an alleged May 2010 assault was “fatally flawed” because it carries a 10-year statute of limitations and prosecutors chose to go the route of a grand jury proceeding with a new case number in 2021, rather than pressing ahead with their original criminal complaint filed in January 2020, which would have required a public preliminary hearing.

According to prosecutors, Weinstein sexually battered the Count 5 victim using restraint inside a Beverly Hills hotel on May 11, 2010.

“This was a continuation of the same case,” Los Angeles County Deputy District Attorney Paul Thompson argued Thursday before the ruling, claiming even the court referred to the indictment as a “superseding indictment” at one point.

Jackson also argued to have Counts 6 and 7 related to an alleged rape and forced oral copulation from 2004 or 2005 dismissed, but Judge Lisa Lench let them stand.

In rejecting Count 5, Lench gave prosecutors a chance to try again. Thompson promised to file amended paperwork by the end of the day with language making it clear why the statute of limitations had not expired.

“At this point, they’re trying to put lipstick on a pig. The facts don’t support this charge. It’s barred by the statute of limitations. They know it, we know it, the judge knows it. It’s over for them,” defense lawyer Mark Werksman told the Daily News after the hearing.

It was Werksman who entered Weinstein’s not guilty plea in the California case last week.