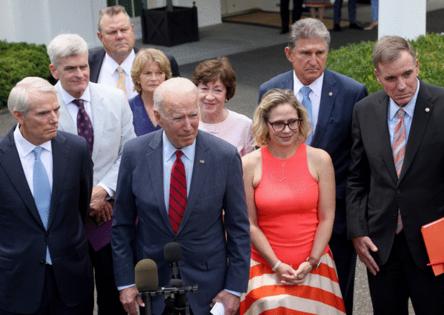 WASHINGTON — Senate negotiators announced Wednesday that they have resolved outstanding issues on a bipartisan infrastructure package and are prepared to vote as early as Wednesday night to consider the measure.

Sen. Rob Portman of Ohio, the GOP's lead negotiator, described the legislation as a major infrastructure package that would be popular both inside and outside Washington. For weeks, 11 Republicans and 11 Democrats have been involved in the talks with White House officials.

“It's going to help with regard to our roads and our bridges and our ports and our waterways,” Portman said. “It also helps expand the digital infrastructure of broadband.”

Sen. Kyrsten Sinema, the top Democratic negotiator, confirmed the agreement. "We’re moving to a motion to proceed tonight," she said.

Sinema also said the group plans to release some text Wednesday and then "as we get the last pieces done, we'll release them as well."

Senate Majority Leader Charles E. Schumer, D-N.Y., had said on the floor that members should be prepared for a cloture vote on the motion to proceed to the legislative vehicle that will include text of the agreement as early as Wednesday night.

Sen. Chris Coons of Delaware, a Democratic negotiator, said the agreement still needs to be vetted by all Senate Democrats. That's a crucial step in the 50-50 Senate.

"I'm not saying anything until we have a caucus lunch. I am optimistic," said Coons, adding he was anxious to hear the Democrats' reaction to the details. "But in terms of the ongoing negotiations between the core members of the working group, they have concluded."

Portman said the legislative text was still being finalized and some number crunching remains, but the bill is “more than paid for” with budget offsets.

The reaction of Democrats at the caucus meeting will be critical, said Sen. Thomas R. Carper, D-Del., the chairman of the Senate Environment and Public Works Committee.

"I'm going to reserve judgment until we've had our briefing at our caucus lunch," Carper said. He had earlier fought with negotiators over water provisions in the bill, but said Wednesday he and his staff worked into the night Tuesday with the administration and negotiators to provide input to the deal.

In an apparent response to complaints from Carper and other top members of committees with jurisdiction over infrastructure issues that they were shut out of the bipartisan group’s negotiating process, the Republican negotiators talked up the contributions of committee chairs and ranking members to their final product.

They said the deal includes $65 billion for broadband deployment and affordability programs.

Sen. Susan Collins, R-Maine, who focused on that portion of the deal said the pandemic showed the importance of digital infrastructure.

“Our goal is to ensure that there is far greater access to high-speed internet services,” Collins said.

Sen. Bill Cassidy, R-La., pointed to $47 billion to improve “resiliency” in part to guard against coastal damage from flooding that his state has seen.

Cassidy may have had former President Donald Trump's admonitions to Republicans in mind when he cited the importance of the resiliency money to help people impacted by flooding. Trump was urging the GOP not to make a deal.

“I am amazed that there's some who oppose this just because they think that if you ever get anything done somehow it's a sign of weakness,” Cassidy said. “I have no clue what they mean.”

Raging against the deal in recent days, Trump warned GOP lawmakers: "Don’t let the Radical Left play you for weak fools and losers!”