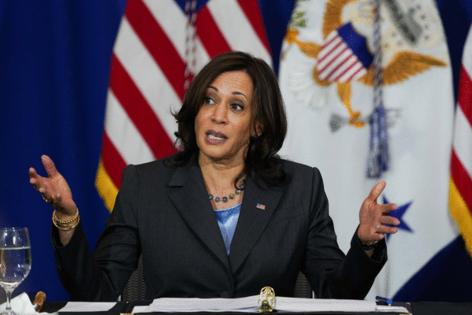 Vice President Kamala Harris and Interior Secretary Deb Haaland will meet on Tuesday with leaders from several Native American tribes to discuss voting rights amid a broader push by the administration to promote legislation on the issue.

The meeting in Harris’ office comes as the Biden administration pushes for expanding ballot access in the face of new restrictions at the state level.

Invited to the meeting with Harris are Kevin Killer, the president of the Oglala Sioux Tribe and a former South Dakota state legislator; Shelly Fryant, the chairwoman of the Confederated Salish and Kootenai Tribes in Montana; and Julie Kitka, the president of the Alaska Federation of Natives, which represents members of 168 federally recognized tribes in Alaska, according to a White House official.

Also included are Prairie Rose Seminole, a political consultant and founder of the North Dakota Democratic Party’s Native American Caucus, and Allie Young, a citizen of the Diné Navajo Nation in New Mexico and founder of Protect the Sacred, a group which seeks to educate and empower young Native American leaders.

Native Americans faced a long history of discrimination at the voting booth. Congress did not pass legislation recognizing Native Americans as full citizens until 1924, and many states maintained formal restrictions on their voting rights into the early 1960s.

There continue to be numerous challenges to ballot access.

A 2019 analysis by New York University’s Brennan Center for Justice noted that some reservation residents have to drive hundreds of miles to vote because of the shortage of polling places and ballot drop boxes.

State rules also can make it difficult to register to vote.

“Many Native Americans, especially those who live on reservations, do not have traditional street addresses. This has resulted in voter registration applications being rejected in many states,” the Brennan Center said.

A proposed Native American voting rights bill seeks to increase the number of polling places on tribal lands, expand the use of mail voting and ensure that tribal identification documents are accepted for voter ID laws.

But the proposal, which failed to advance last Congress, likely faces a tough road to passage as other voting rights legislation stalled in the Senate last month.

WASHINGTON — Parts of the U.S. health system “are in dire straits,” as the spread of the COVID-19 delta variant forces some states to prepare for rationed medical care, said Rochelle Walensky, head of the U.S. ...Read More

Iceland elected Europe’s first female-majority legislature in a ballot where the centrist ruling coalition added to its majority after steering the nation through the pandemic.