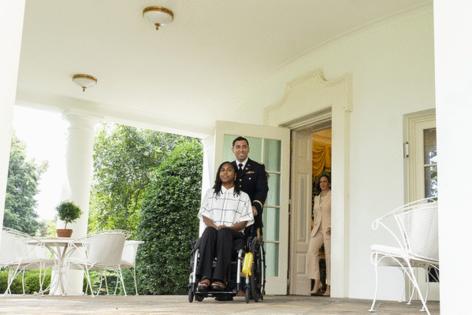 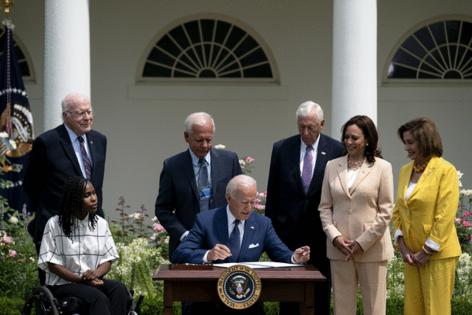 WASHINGTON — The White House’s Monday celebration of the landmark Americans with Disabilities Act did not escape some signs of modern partisanship.

It was a bipartisan moment at a Rose Garden ceremony that looked back on the groundbreaking law’s bipartisan history.

“The ADA gives all Americans the opportunity to fully participate in our democracy, in our economy and in our society,” Vice President Kamala Harris said. “The ADA was a very important beginning, but there is still so much work to be done both on enforcement and on future legislation,” she added.

Both the president and vice president spoke about the challenges for voters with disabilities when they try to go to the polling place, from broken elevators and issues with ramps to the heights of tables.

While calling the ADA a “triumph of American values,” Biden said: “But of course, this law didn’t bring an end to the work we need to do. Today, too many Americans still face barriers to freedom and equality, but thanks to this movement that spans all races, beliefs, backgrounds and generations, we’re once again making progress together.”

He also renewed his call for legislative action to improve pay for caregivers, as well as for ending the legal ability to pay workers with disabilities a sub-minimum wage.

It was almost a decade ago now, a time when Harkin was still a key leader in the Senate, that Dole tried and failed to cajole his GOP colleagues to support a United Nations disability treaty.

Neither was among the attendees at the event Monday, but their ability to work across the aisle stood as a stark reminder of how polarized the current Congress is.

McCarthy and the top House Democrats — Speaker Nancy Pelosi of California and Majority Leader Steny H. Hoyer of Maryland — were all present at the White House. Their standoff over the composition of a select committee to investigate the Jan. 6 attack on the Capitol virtually ensured that modern partisan divides would creep into the event.

McCarthy spoke to reporters gathered in the Rose Garden ahead of the event, with a military band playing in the background, and used the opportunity to criticize Pelosi’s decision to reject his proposed appointment of Reps. Jim Banks, R-Ind., and Jim Jordan, R-Ohio, to the select committee.

McCarthy responded by pulling back his other proposed GOP members. When asked about Republicans who think it would make more sense for the GOP Conference to participate in the process, McCarthy responded, “Who was that? Adam and Liz? Aren’t they kind of like Pelosi Republicans?”

He was referring to Wyoming GOP Rep. Liz Cheney and Illinois GOP Rep. Adam Kinzinger, who have been selected for the panel by the Democratic speaker.

But that underscored the reality that for as much as Biden has yearned for the era of comity that helped lead to legislative victories like the ADA, 2021 looks far different. Aside from the select committee fracas, lawmakers and the White House are wrangling over a sweeping bipartisan infrastructure bill and an even larger reconciliation bill that is likely to only get Democratic votes.

“I’m confident we’ll get something,” Hoyer told reporters at the White House when asked about the legislative proposals. “I think both Republicans and Democrats want to pass an infrastructure bill; you say, ‘I’m not going to do this, I’m not going to do that.’ Let’s let it play out.”