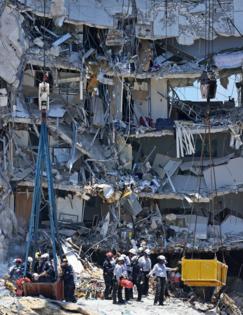 The ripples of the collapse of Champlain Towers South in Surfside, Florida, have only begun to move from the center of a disaster that has taken weeks to triage.

Families endured the waiting to confirm the loss of their loved ones so they can properly mourn the dozens of people lost. Search crews painstakingly pursued any sign of life, until it became clear they would only be recovering the dead. Investigators began a long process of studying a literal mountain of physical evidence to understand how this could have happened.

As the community moves past the first month of shock, the path forward is framed by questions of law, public policy and governance of the construction and maintenance of towers such as Champlain Towers South.

Even without a clear picture of why the tower fell, minds from across several disciplines, some overlapping, are expected to fixate on one goal: preventing this from ever happening again.

Several layers of government play different roles in overseeing the construction and maintenance of multi-family buildings. The interplay between multiple bureaucracies, and how those governments interact with the owners and management of these buildings, are expected to be examined from city hall to Tallahassee.

In the collapse’s aftermath, many voices started to call for a review of the 40-year recertification process, a requirement for buildings in Miami-Dade and Broward counties to evaluate the building’s structural integrity, make necessary repairs and get government inspectors to sign off on the work 40 years after the building’s construction. The requirement exceeds the demands of the Florida building code. It was created in the 1970s following the collapse of an office building in downtown Miami that was leased by the Drug Enforcement Administration, killing seven people. It’s possible more counties will adopt the standard set by Miami-Dade and Broward.

Changes could require the recertifications to happen sooner, or that they include more rigorous surveys and studies.

At levels of government closest to home, municipal officials who oversee and approve these inspections are considering adjusting their notification timelines and the personnel they employ to inspect and enforce violations.

The collapse in one of Miami-Dade’s small municipalities raised questions about leaving high-rise building inspections to tiny governments. After the catastrophe had governments across Miami-Dade promising more aggressive oversight of older buildings, Surfside requested loans of city and county building inspectors to deploy to properties within town limits.

The number of U.S. COVID-19 deaths has surpassed the toll of the 1918 influenza pandemic, a milestone many experts say was avoidable after the arrival of vaccines.

BALTIMORE — Pfizer and BioNTech said Monday that their COVID-19 vaccine was safe, well-tolerated and produced a strong immune response in children ages 5 to 11, bringing hope to many parents that their children could ...Read More