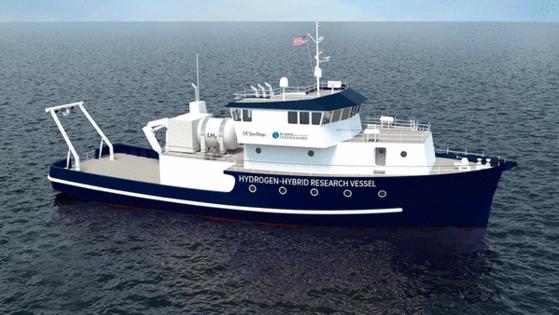 SAN DIEGO — The state has given the University of California, San Diego $35 million to build a coastal research vessel that will focus on such pressing topics as sea-level rise, the health of marine fisheries, ocean acidification, El Nino and the atmospheric rivers that periodically bring damaging storms to California.

The university's Scripps Institution of Oceanography will oversee the design and construction of the 125-foot vessel, which will have a hydrogen-hybrid propulsion system, an emerging technology meant to limit the release of greenhouse gases.

"We'll be able to do about 70% of our missions with hydrogen alone," Bruce Applegate, Scripps' head of ship operations, told The San Diego Union-Tribune on Friday.

The vessel — whose funding comes from the state's general fund — will primarily sail in California waters, also will be able to operate with diesel fuel.

The as-yet unnamed ship will be used for research and education, replacing the research vessel Robert Gordon Sproul, which is nearing the end of its 40-year service life.

"After a four-decade run (for Sproul), it is high time Scripps built a new research vessel that can keep up with the high-caliber work they continue to churn out, and help our state navigate the troubled waters of sea level rise and our evolving climate," state Senate pro Tempore Toni G. Atkins said in a statement.

Scripps Oceanography was created as a private research station in 1903 and became part of the University of California system in 1912. Initially, the institute had very limited resources, using a schooner to conduct basic studies of the physics and biology of the ocean environment.

The station grew rapidly during World War II as its faculty and staff collaborated with the Navy and Marines, leading to major advances in ocean acoustics and wave forecasting. Oceanographer Walter Munk's wave research played a key role in helping Allied forces deal with the surf during the D-Day landings in France in 1944.

The institute became even better known in the 1950s and '60s during the so-called "golden age of exploration," when it staged deep-sea expeditions that led to major discoveries about plate tectonics, ocean currents and marine ecosystems. Some of the trips were led or planned by Scripps oceanographer Roger Revelle, the "grandfather of the greenhouse effect."

The expansion was made possible by the Navy, which helped Scripps establish one of the world's largest and most active fleet of research vessels.

Scripps also became deeply involved in the study of the southward flowing California Current, which extends from British Columbia to Baja California Sur. The current sustains some of the richest fisheries in the world, and it affects weather patterns that play a role in everything from drought and wildfires to heavy winter rains.

The institute and its collaborators pay special attention to such things as upwelling, which allows cooler, deeper, nutrient-rich water to rise to the surface. This affects the distribution of algae and, in some cases, can lead to blooms that kill some forms of sea life. It also can affect the health of the marine food chain.

In recent years, Scripps also has stepped up is studies of atmospheric rivers — columns of moisture that flow into California from the tropics and subtropics. The rivers can produce heavy rainfall, contributing to the sort of coastal erosion that has affected the safety of seaside rail service in Del Mar.

Data from research ships also has helped the institute develop a wildfire alert network throughout California.

The university's research fleet expeditions "are keys to solving problems as well as understanding them, providing solutions that we need so desperately today," Scripps Director Margaret Leinen said Friday.