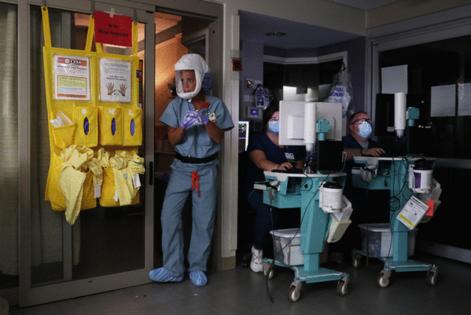 CHICAGO — The seven-day average of daily COVID-19 cases in Illinois has increased by five times in the past month after reaching the lowest point since the beginning of the pandemic in late June.

Illinois averaged 1,140 new coronavirus cases daily for the week ending Friday, compared with an average of 294 cases during the week that ended July 1, according to data from the Illinois Department of Public Health.

In late June, the average number of new daily cases had dipped to 222, the lowest of the pandemic.

While known infections remain lower this summer than in 2020, the recent surge has the state catching up to its pace of last July, which marked the beginning of an uptick that came after the state began allowing indoor dining and loosened other restrictions.

Still, the daily average number of cases remains far lower than its height of 12,384, recorded in the peak of the fall surge just before last Thanksgiving.

The new figures released by the state Friday also showed an increase in the state’s case positivity rate, up to 3.5% from 1.9% last week. Hospitalizations in regions across the state also continue to show a slight increase, with the highest average in west central Illinois, roughly 10 hospitalizations per 100,000 people.

While both the positivity rate and hospitalizations lag far behind numbers at the peak of the pandemic, they do show an upswing that comes as the number of new vaccinations drops across Illinois.

The current seven-day rolling average of vaccines administered daily is 19,928 doses. That’s down from 21,217 last week. All told, more than 73% of Illinois adults have received at least one vaccine does and more than 58% are fully vaccinated, according to data from the Centers for Disease Control and Prevention.

Illinois is tracking pretty close to the national average on vaccines. Nationwide, 68% of adults have received at least one dose of the vaccine and 60% are fully vaccinated, according to the CDC.