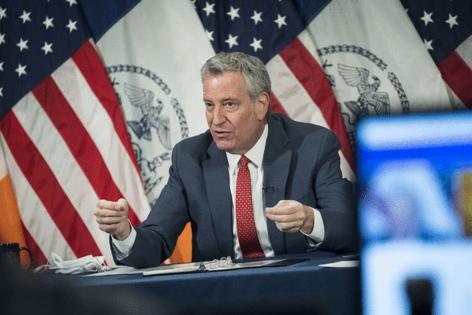 The mayor pledged Friday to roll out more vaccine mandates in the city, charging that a “purely voluntary system” isn’t cutting it any longer while entertaining the idea of requiring proof of immunization for most social activities.

Fresh off of issuing a vaccine-or-testing mandate for the city’s public health care workers, de Blasio signaled in his weekly appearance on WNYC that it’s only a matter of time before he implements similar requirements for other groups of municipal employees.

“We have reached the limits of a purely voluntary system,” he said. “It’s time for more mandates, different kinds, different places.”

Though the legality of such a move is unclear, de Blasio suggested he’s even open to following the lead of the French government, which recently instated a “COVID pass” system, under which people must show proof of vaccination to enter bars, restaurants, shopping malls and most other public spaces.

“I’m not always the biggest Macron fan, but in this case, I think that’s a direction we need to seriously consider,” de Blasio said, referring to French President Emanuel Macron.

On Wednesday, de Blasio issued an order requiring employees of the city’s public hospital and health systems to either show proof of vaccination or submit to weekly coronavirus tests amid revelations that only about 60% of those workers have gotten their shots.

Considering his tough talk on mandates, critics have questioned why de Blasio is offering health care workers the testing option as a way out of getting inoculated.

The mayor suggested Friday he softened the mandate out of respect for the role health care workers have played in fighting COVID-19.

“Look, it’s a message to our health care workers who we love, they are our heroes, they’ve done amazing work, but now it’s time to get vaccinated,” he said.

SAN DIEGO — Like the many gun safety bills that have come before it, the one just signed by California Gov. Gavin Newsom is borne from tragedy.

A school bus driver was fatally stabbed in front of students after picking them up from a Washington state elementary school Friday afternoon, authorities said.

The alleged killer, who is now in custody, got on the bus ...Read More

TAMPA, Fla. — The top-line trends are widely known, visible in political campaigns, video programming and store shelves: People of Hispanic heritage are growing in total number and as a share of the U.S. population.