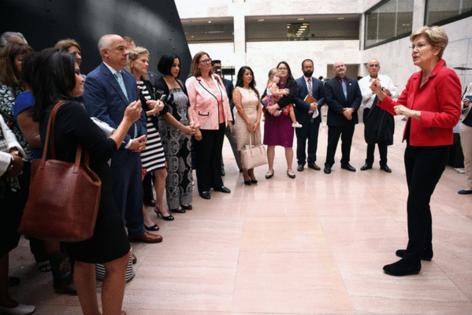 But they still await the biggest get of all: President Joe Biden. And on Thursday, they expressed frustration over the White House's apparent lack of interest in scheduling a meeting with members of the Texas group.

During a Zoom conversation with U.S. Rep Lloyd Doggett of Austin, state Rep. Richard Peña Raymond of Laredo vented about the holdup.

“He won’t meet with us on Zoom like this, and I’m trying to be tactful, but I don’t know how else to say it, man. I’m just pissed off at this point. He doesn’t give us the respect the way you have,” Raymond told Doggett.

And in a subsequent Zoom meeting with Beto O'Rourke, in which the former Democratic congressman and presidential candidate announced a $600,000 donation to help pay for the Washington sojourn, O'Rourke encouraged them to ramp up pressure on the White House.

"I feel very strongly about this. I think you need to center and focus all of your effort on the president," O'Rourke said.

Biden has been vocal about the need to protect voting rights against legislation that has passed or is being considered in Republican-led legislatures across the country. Texas Democrats have described the measures being pushed by their Republican colleagues as discriminatory against people of color. And they have called on congressional Democrats to pass sweeping laws that would block these Republican efforts to limit voting access.

O'Rourke told Democrats on Thursday that Biden needs to be held accountable for the voting bills stalled in Congress.

"I know that there's a balance for us to strike. We want to continue to encourage him and celebrate the good work that he's doing and demonstrate our support for him. But we must also hold him accountable. And right now, he is not. He's not doing what is required, given the threat that we face in Texas," O'Rourke said.

"The least he could do, in my opinion, is to meet with you and listen to you and hear it directly from you about what your constituents face already and what they're likely to have to endure going forward if voter suppression legislation is passed in Texas and voting rights legislation is not passed in Washington, D.C.," he said.

The White House has not indicated whether a meeting might ultimately be scheduled. On Monday, when asked if the president would meet with the Texas delegation, White House press secretary Jen Psaki said she doesn't "have any meetings to preview for you at this point in time."

"All we can do is ask and push through our other congressional members," said state Rep. Sheryl Cole, D-Austin. "Throughout the country, we’ve received so much support that it has risen to a need for presidential attention."

An Idaho charter school principal and father of seven has died after reportedly contracting COVID-19.

“It is with shock and deep sadness that we announce the passing of Dr. Javier Castaneda,” read a letter Heritage ...Read More

LOS ANGELES — COVID-19 vaccinations are lagging the most in younger Black and Latino residents of Los Angeles County.

Vaccination rates among L.A. County’s Black residents up to age 49 remain below 50%, and among ...Read More

LOS ANGELES — Dozens of anti-vaccination protesters gathered for a rally Saturday in front of Los Angeles City Hall, but unlike previous gatherings no counter-demonstrators turned out and things remained mostly peaceful....Read More

LOS ANGELES — Both of Los Angeles County’s juvenile halls are unsuitable to house young people, a state agency that monitors such facilities has found.

The unanimous vote Thursday by the Board of State and Community ...Read More