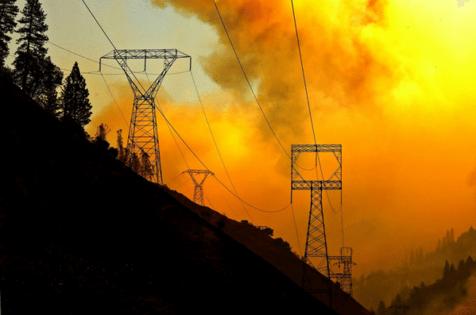 The PG&E utility pledged Wednesday to place thousands of miles of electric lines underground in a quest to reduce the likelihood of destructive wildfires in Northern and Central California, but provided few details on where exactly — and how quickly — the effort could play out in the years to come.

The promise arrived as the nearly 90,000-acre Dixie fire continued to roar through rugged Butte County and three days after the utility admitted in a state regulatory filing that its equipment touching a tree may have sparked the blaze. The fire remained just 15% contained as of Wednesday afternoon.

Speaking first from the nearby town of Chico and later in a call with reporters, Chief Executive Officer Patti Poppe said that the utility had planned to announce the project a few months from now but “couldn’t wait, particularly given the proximity to the Dixie fire and the emotional toll it has on all of us.”

“We want what all of our customers want, a safe and resilient energy system,” she said. “We have taken a stand that catastrophic wildfires shall stop.”

Yet when it came to sharing the details of that potential work — including how many years such an undertaking could require and which lines or geographic areas will be prioritized first — the utility’s executives remained vague, beyond saying its scope will ultimately include about 10,000 miles.

Over the coming months, a staff of public safety power shutoff specialists and engineers will map out the highest-risk areas and lines that are “ripe” for undergrounding, Poppe said. She did not explain which geographies or specific lines could be affected.

At that rate, hitting the 10,000-mile mark could ostensibly take about a decade — a notion Poppe was quick to bat down, although she did not provide an alternative timeline.

“We’re not saying that this is a decadelong program,” she said. “Our objective is to ... do it as fast as possible.”