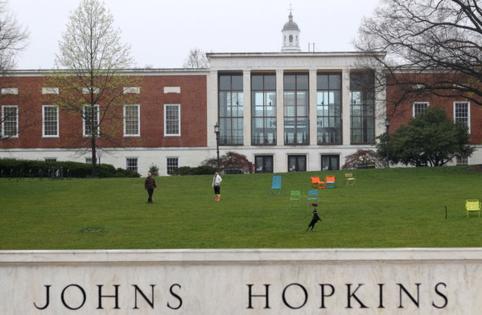 BALTIMORE — U.S. COVID-19 vaccination rates continue to lag largely due to widespread disinformation and misinformation campaigns designed to suppress the science and sway people from getting immunized against the virus, a top epidemiologist at the Johns Hopkins Bloomberg School of Public Health said Wednesday.

Less than 50% of the U.S. population and 60% of those older than 18 have been fully vaccinated, according to the latest figures from the U.S. Centers for Disease Control and Prevention. Slightly more than 56% of the population has received at least one dose. That’s well behind the goal President Joe Biden’s administration set for the nation in March, which aimed for 70% of adults to have at least one dose of vaccine by July 4.

Jennifer Nuzzo, the Hopkins epidemiologist and senior scholar at its Center for Health Security, said she has met personally with several groups representing a range of political ideologies — “health care workers, celebrities, Q-Anon conspirators, moms” — and found that most people have reasonable questions and concerns about the vaccines that can be addressed.

“We need a national plan to address it,” Nuzzo said during a virtual seminar with U.S. Sen. Chris Van Hollen, former acting Centers for Medicare and Medicaid Services administrator Andy Slavitt and others. “Unfortunately, our efforts have slowed and our rollout of vaccine is meeting a tremendous amount of resistance, and it’s setting us back far from where we need to be right now.”

Infections, hospitalizations and deaths caused by the coronavirus plummeted as vaccinations picked up in the spring and early summer. But as supply grew, demand fell.

States like Maryland have created vaccine equity task forces meant to bring immunizations into communities with access challenges. But the work is slow and tedious, and the mass vaccination centers meant to quickly vaccinate as many people as possible statewide have closed.

Because so many people — including children younger than 12, who remain ineligible for the vaccines — have not been immunized, the virus continues to mutate. Several “variants of concern” have been identified by the CDC, including the delta variant. Some are considered more contagious and more effective at neutralizing the protection offered by vaccines.

“We have an even faster growing virus, probably twice as fast as 2020′s virus, yet we have a tool that can stop it,” Slavitt said. “People have decided to politicize the issue of vaccines for some reason.”

It’s possible more people will want to get vaccinated after the vaccines receive full federal approval from the U.S. Food and Drug Administration, Slavitt said. But for now, “everything should be on the table” to protect against the virus, he said, including mandatory vaccine or daily testing policies at workplaces, events and schools.

In Maryland, about 58% of the population has been fully vaccinated, and more than 76% of adults over 18 have at least one dose of vaccine. More than 200 cases were added to the state’s infection tally Wednesday, and just fewer than 150 were hospitalized, state data show.

People who remain unvaccinated are now more likely to contract severe disease and require hospitalization than those who have been inoculated. And nearly all of the deaths caused by COVID-19 are linked to people who have not been vaccinated, top U.S. health officials say.

“All states remain at risk for seeing case surges and deaths,” Nuzzo said. “We are in a very worrisome phase right now.”

Van Hollen, a Democrat, said he’s been encouraged by Republicans in Congress and on the airwaves starting to publicize their trust in the vaccines. Rep. Steve Scalise, the No. 2 House Republican, received his first dose of the Pfizer/BioNTech vaccine over the weekend, and Senate Minority Leader Mitch McConnell has endorsed the immunizations, too.

“These shots need to get in everybody’s arm as rapidly as possible, or we’re going to be back in a situation in the fall that we don’t yearn for, that we went through last year,” McConnell said during his weekly news conference. “I want to encourage everybody to do that and to ignore all of these other voices that are giving demonstrably bad advice.”

Meanwhile, as false narratives and dangerous rhetoric continue to circulate, threats against public health figures, such as Dr. Anthony Fauci, the nation’s top infectious disease expert, have escalated, Nuzzo said. And Hopkins’ experts have not been immune to harassment, she said.

Hopkins has outlined a five-prong approach to strengthening the public health system, which includes a call to end the harassment against health officials for communicating with the public.

“This general phenomenon has affected people who are speaking as public health experts,” said Dr. Joshua Sharfstein, a vice dean at the Bloomberg school. “What has happened to public health officials has been unprecedented during the pandemic. Even as they are trying to keep people alive in their own communities they are fearing for their own safety. It’s why so many people have left their jobs.”

Slavitt said the malicious intentions of bad actors and untrustworthy messengers not only jeopardizes the public health field but also endangers those who remain hesitant about getting vaccinated.

“Misinformation is a business,” he said. “Convincing people not to get vaccinated is a way to either raise money politically or promote engagement on a website, and this is not what we should expect from each other at a ‘pull-together’ moment.”