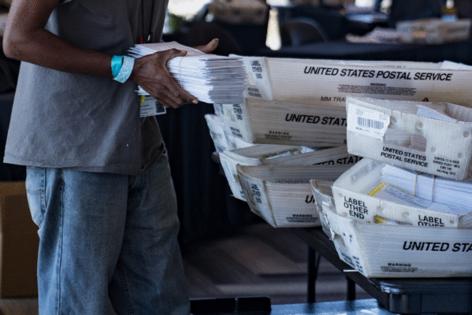 But the ballot review stalled because the county asked the judge to throw out the case.

Both sides will have their day in court Monday, when Superior Court Judge Brian Amero considers whether and how to move forward.

Election skeptics will argue they need an opportunity to search for possible counterfeit ballots. Fulton officials will ask the judge to put an end to the quest to undermine Democrat Joe Biden's nearly 12,000-vote win over Republican Donald Trump.

"We should be able to prove whether the election results were correct or not. They're certainly under question," said Garland Favorito, the lead plaintiff in the lawsuit. "If something nefarious happened, we can prevent it in the future."

Attorneys for Fulton have argued that the case is a baseless and flawed attempt to use the courts to intervene in an election that was settled seven months ago.

Election officials have repeatedly said there's no evidence of significant fraud, and two recounts validated the results. The secretary of state's office is investigating over 100 complaints about last year's general election, and even if all of them exposed invalid votes, Biden still would have won.

Amero previously ordered Fulton to unseal its absentee ballots so plaintiffs in the case could make high-resolution copies, enabling them to try to find fake ballots. The case is based on sworn affidavits from several Republicans who said they saw "pristine" ballots with perfectly filled ovals and no fold lines during November's manual recount and audit.

The ballot review will probably survive in some form, said Don Samuel, a prominent Atlanta attorney hired by the Fulton County elections board. The judge will have to decide how to proceed.