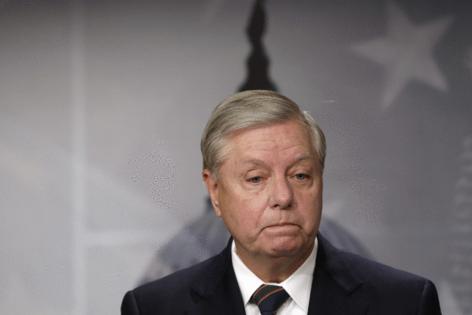 South Carolina’s Lindsey Graham, who’s in a group of 21 senators from both parties who last week signed on to the framework of a plan to present to Biden, was among lawmakers seeking to set the stage for the next round of bargaining. Biden has said he’ll review the bipartisan proposal on Monday.

“I would just say this: President Biden, if you want an infrastructure deal with a trillion dollars it’s there for the taking — you just need to get involved,” Graham said on “Fox News Sunday.”

With the Senate and House nearing extended July 4 recesses, talks are down to the wire on a possible compromise authorizing a big boost for roads, bridges and other critical infrastructure, even as Senate Democrats pursue a second track for a Democrat-only bill that could entail vast expansions of other social spending Biden has put forth.

How to pay for the infrastructure spending is the most problematic, immediate issue dividing the two parties as well as Democrats’ moderate and progressive wings.

The White House on Friday reiterated Biden’s opposition to indexing the gasoline tax to inflation to help pay for an infrastructure plan, raising questions about the viability of the bipartisan compromise emerging in the Senate. The White House also hasn’t embraced other ideas on the table, including a fee on electric vehicles and repurposing unspent COVID-19 relief funds.

Sanders, I-Vt., said on NBC’s “Meet the Press” that it’s “mostly good” because the spending on infrastructure is critically needed, but that he has concerns about the same “pay-fors” like gas tax indexing that haven’t been signed onto by the Biden administration, as well as an “infrastructure bank” favored by Republicans to harness private investment.

“One of the concerns that I do have about the bipartisan bill is how they are going to pay for their proposals, and they’re not clear yet,” Sanders said. “I don’t know that they even know yet, but some of the speculation is raising a gas tax, which I don’t support, a fee on electric vehicles, privatization of infrastructure, those are proposals that I would not support.”

Sanders, who is mapping plans for a second so-called “reconciliation” package that could short-circuit any GOP filibuster, said he is working on a fiscal blueprint that could pave the way for as much as $6 trillion, though he’s open to changing that level in a Senate divided 50-50 between the two parties.

Democrats can’t afford to lose a single vote if they want to pass a budget plan for a later package authorizing a big jump in spending for climate change, child care, expanded Medicare and other party priorities.

“That’s something we’re going to have to hammer out and I’m going to do it,” Sanders said on CNN, referring to a final compromise plan among Democrats on the larger package.

Graham cautioned that Biden can’t count on any Republicans to support either a budget plan or a reconciliation package that is anywhere near $6 trillion.

“That will be a very big sticking point,” he said. If Biden goes down that path, he’ll get “a lot of pushback” from all Republicans, Graham said.

LEXINGTON, Ky. — U.S. Sen. Mitch McConnell is running ads encouraging Kentuckians to get the COVID-19 vaccination as the delta variant is causing a fourth surge of COVID-19 cases in the state.

The ads were purchased by ...Read More