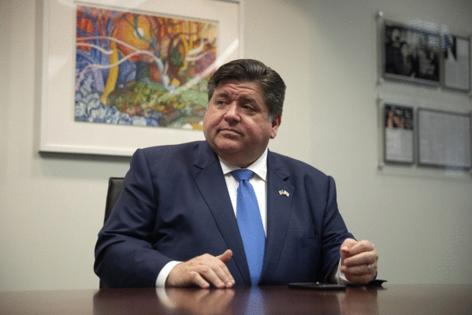 The holiday commemorates June 19, 1865, the day Union troops arrived in Galveston, Texas, and informed the last enslaved African Americans that the Civil War had ended and that Lincoln’s proclamation more than two years earlier had declared them free.

“Today, even a full 156 years after the 13th Amendment formally and constitutionally declared slavery illegal throughout the entire United States, we all know what it means to see justice as yet undelivered,” Pritzker said before signing the bill at the Abraham Lincoln Presidential Library and Museum in Springfield.

The law, which takes effect Jan. 1, will make June 19 — National Freedom Day — a paid holiday for state workers and public school employees when it falls on a weekday. Because the day falls on a Sunday next year, the first paid holiday will be in 2023.

Flags across the state will be flown at half-staff, and a special Juneteenth flag will fly above the state Capitol beginning this year.

Democratic state Rep. LaShawn Ford of Chicago had been pushing for several years to make Juneteenth a state holiday, but the effort gained new momentum last year after the public outcry over the death of George Floyd at the hands of a white police officer in Minneapolis.

Even after the Illinois Legislative Black Caucus championed a sweeping social justice agenda dealing with criminal justice, education, economic opportunity and health care that Pritzker signed into law earlier this year, there remains much work to do to address systemic racism in the state, Ford said.

But the measure Pritzker signed Wednesday, which was approved with bipartisan support in the legislature, “shows that as much as we think we have a lot of work to do — and we do — we come together to do things like this, to prove that it’s possible for us to do a lot more,” Ford said.