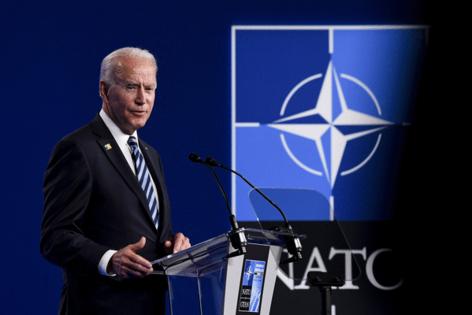 President Joe Biden plans to warn Russian President Vladimir Putin that the U.S. will respond to actions that conflict with its national interests during a meeting scheduled for 1 p.m. Wednesday in Geneva, according to White House officials.

The White House expects the meeting to last four to five hours, but doesn’t anticipate any concrete policy announcements to come from it, the officials said. Biden instead wants to use his first sit-down with the Russian leader to lay out the circumstances in which U.S. will retaliate against Russia and also find areas to cooperate.

“I’m always ready,” Biden said Tuesday when asked by reporters during a meeting with the Swiss president if he’s prepared to meet Putin.

Biden and Putin are expected to discuss a renewal of the New START nuclear arms pact that is set to expire in 2026, according to the officials. The U.S. president also believes human rights and Putin’s crackdown on jailed opposition leader Alexei Navalny’s political movement are on the table. The two leaders aren’t planning to share a meal.

Ahead of the meeting, Biden will dine Tuesday evening in Geneva with Secretary of State Antony Blinken and national security adviser Jake Sullivan.

The officials, who spoke to reporters aboard Air Force One en route to Geneva, said Blinken and Putin’s foreign minister Sergei Lavrov will join the leaders for part of the meeting. Biden and Putin will appear in front of the media before gathering with a larger group of aides.

Biden consulted with U.S. allies ahead of the meeting last week at the Group of Seven summit meeting in the United Kingdom and this week at NATO and EU summits in Brussels. He also spoke with outside policy experts as part of his preparation.