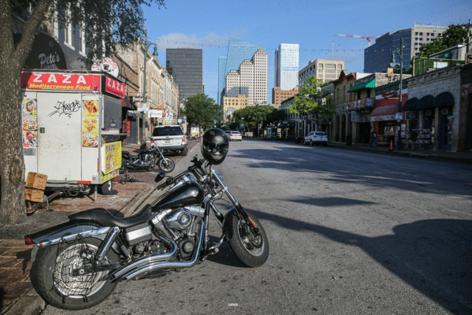 Austin's mass shooting early Saturday renewed pleas from Texas Democrats for gun control measures and Gov. Greg Abbott to veto a bill that would end the requirement to obtain a permit to carry handguns.

It's an all too familiar call from Democrats, but one that has yet to lead to tighter gun restrictions. After 23 people died and dozens more were injured in the 2019 shooting at an El Paso Walmart, Republicans vowed to work across the aisle to find common ground on gun safety measures.

Instead, the GOP-led Legislature this year passed the permitless carry measure to allow anyone over the age of 21 who can legally possess a firearm in Texas to carry a handgun in public without a license. They also approved bills to allow school marshals to carry concealed guns instead of keeping them locked away, let hotel guests bring guns to their rooms, remove sales taxes for firearm safety equipment and lift Texas-made firearm silencers from the state's list of prohibited weapons.

In response to the mass shooting on Sixth Street that killed a tourist from New York and left 13 wounded, Rep. Vikki Goodwin, D-Austin, urged Abbott to veto the permitless carry bill in a letter Monday.

"We cannot ignore the pattern of gun violence that we have seen again and again," Goodwin wrote. "While I realize that laws cannot singlehandedly keep guns out of the wrong hands, I also understand that they improve boundaries, create order and set a tone. We need you, as our governor, to send the message that we are addressing mass gun violence in Texas."

The Legislature's passage of permitless carry delivered a victory for gun advocates, including the National Rifle Association and Gun Owners of America. Republicans argued that the measure, which they often call "constitutional carry," appropriately expands gun rights under the Second Amendment.

Abbott previously has said he will sign the permitless carry bill, although he's been silent about the measure since the Legislature adjourned for its regular session. Both chambers sent the bill to Abbott last month.

Abbott has until Sunday to sign or veto the bill. If he does nothing, it will automatically become law without his signature.

A spokeswoman for the governor did not respond to a request for comment.

Other Texas Democrats issued statements hours after the Austin shooting, calling for unity in the upcoming special legislative sessions. Lawmakers are expected to head back to the Capitol later this year to rewrite voting laws and redraw political boundaries, among other possible issues.

"When I think of the word 'tragedy,' I think of something uncommonly awful. Unfortunately, mass shootings have become so commonplace that tragedy is just a part of the Texas experience at this point," tweeted Rep. Joe Moody, an El Paso Democrat who has been outspoken about the need for bipartisan gun control measures after the El Paso shooting. "A special session is ahead, with another regular session not long after that. I hope we finally take meaningful action to make these tragedies rarer in our state."

"I am angry because the politicians of Texas have failed to keep their constituents safe," Eckhardt said in a statement, adding that dozens of Texans have died in mass shootings across the state in recent years. "Yet the Legislature just spent five months making it easier for violent people to get guns."