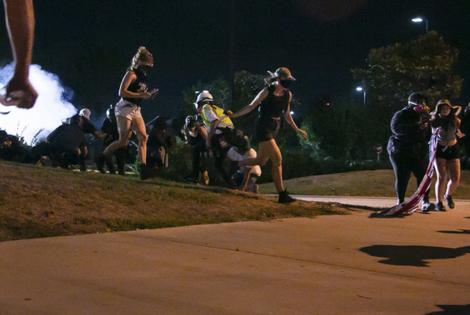 LOS ANGELES — A federal judge has granted a preliminary injunction limiting the Los Angeles County Sheriff’s Department’s use of projectiles and chemical agents at protests, finding that it has indiscriminately fired them at peaceful protesters, legal observers and journalists.

U.S. District Judge Dolly M. Gee’s ruling May 28 stemmed from a petition for a temporary restraining order filed in September that focused on protests against police violence and the shooting of Dijon Kizzee, whose killing by sheriff’s deputies Aug. 31 in Westmont spurred daily protests in front of the South L.A. sheriff’s station.

Gee found that the group of 13 plaintiffs — including protesters injured at marches against police violence last summer — had submitted “overwhelming evidence” showing that at five demonstrations in August and September, deputies had used force on protesters, legal observers and journalists “who were not committing any crime,” with the exception of not following dispersal orders on two occasions.

“They are targeting everybody and that’s what’s wrong,” said Jorge Gonzalez, an attorney representing the plaintiffs. “There are a lot of cases over time that have said you cannot blanket the use of less-lethal ammunitions against all the people that were there. You have to single out the ones that were committing some sort of wrong.”

The sheriff’s department, which had argued that an injunction would limit deputies’ ability to de-escalate situations and thus endanger the public, did not immediately respond to a request for comment. Officials have previously said that deputies during the Kizzee protests used so-called less-lethal force in response to protesters who threw rocks and bottles at officials.

The motion for the preliminary injunction is part of a lawsuit filed Aug. 27 that claims the department engaged in “dangerous, retaliatory abuses,” including unlawful arrests and excessive use of force at protests in May and June against the killing of George Floyd in Minneapolis and 18-year-old Andres Guardado in Gardena.

The judge previously denied the plaintiffs’ request in September for a quick temporary restraining order, wanting a “more orderly presentation of the facts,” and decided later to hear a motion for a preliminary injunction.

The injunction, with language that is subject to change and which won’t take effect before June 21, restricts the department from indiscriminately using weapons including foam rounds, pepper balls, tear gas canisters, flash-bang grenades and stinger grenades against people peacefully attending a protest or gathering.

It allows deputies to take “reasonable, proportional, and targeted action” when necessary to protect against a specific safety threat or act of violence, or to enforce a declaration of unlawful assembly or a dispersal order. But it prohibits weapons that are designed not to be target-specific, like tear gas, from being aimed at particular individuals.

It also requires that deputies, whenever possible, issue warnings or declare an unlawful assembly before using force, and that those warnings be repeated so that people hear them with reasonable time to comply.

The order acknowledged that members of specialized sheriff’s units that are deployed to monitor and respond to protests have held that, during the five protests under review, at least one protester threw items like water bottles and rocks at deputies. But it states that in response to some protesters throwing items, officials indiscriminately used force against people who had not engaged in physical provocation.

On Aug. 25, during a downtown L.A. protest against the police killing of Anthony McClain in Pasadena, the order states that a flash-bang grenade was thrown directly at a legal observer, injuring her legs. It says that she was standing close to deputies and not engaged in violence.

“Particularly concerning is the legal observers’ account that the officers were well aware of their legal observer status and still targeted them,” the judge said.

It also refers to how during a Sept. 5 protest outside the South L.A. sheriff’s station, in response to a bottle or jug thrown over a police barrier and landing several dozen feet from deputies, pepper balls were shot into a peaceful crowd — one hitting a girl on the mouth.

Later that night, it states, deputies shot projectiles at a journalist who had his hands up and was holding his camera as he tried to run away. The account, the order said, was partly corroborated by photographs of large round bruises on the back of the journalist’s legs.

The order said that no evidence indicates that officers had been counseled or disciplined for their use of force at the protests, indicating that the alleged unreasonable use of force had been officially sanctioned and that the plaintiffs could face harm at future protests.

“But even if Plaintiffs do not physically attend more protests in the future, they have also demonstrated the harm of being deterred from exercising their First Amendment right to assembly for fear of injury,” Gee said.