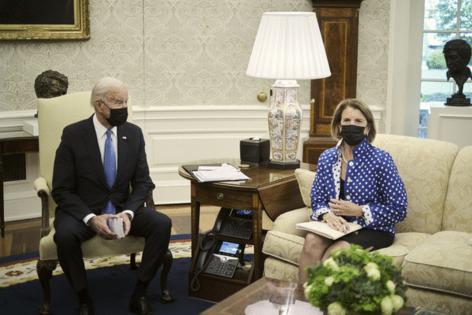 The debate over how to pay for the nation’s roads, bridges and transit systems is leading some normally anti-tax Republicans to embrace higher levies on motorists — even a new one based on miles driven instead of fuel purchased.

But some Democrats who have supported the idea of charging a mileage fee are now opposed. They see infrastructure as an economic stimulus measure and want it paid for by corporate taxes.

That change of positions has Washington observers scratching their heads.

“If you took the positions and went back 10 years, you would say, ‘What?’” said Adrian Moore, vice president of policy at Reason Foundation, a libertarian think tank.

The debate about whether motorists or corporations should foot the bill is threatening to scuttle negotiations between President Joe Biden and Senate Republicans for a massive infrastructure plan. Biden pulled out of one-on-one talks with West Virginia Republican Senate Shelley Moore Capito, but the White House has said he is still engaged with a separate, bipartisan group of senators despite some Democrats agitating for their party to go it alone.

Although the president is in the U.K. for the Group of Seven summit, the Democrats in the bipartisan group went to the White House on Thursday. “Questions need to be addressed, particularly around the details of both policy and pay fors, among other matters,” said Andrew Bates, a White House spokesman.

Indexing the gasoline tax — currently 18.4 cents per gallon — to a measure of inflation has been discussed by the bipartisan group working on a compromise plan, according to Mitt Romney, a Utah Republican who’s taken a prominent role in those talks. He said it wouldn’t raise much money.

Dick Durbin, the No. 2 Senate Democrat, said Thursday he’s in favor of indexing the gas tax. Still, it’s unclear whether the White House would endorse such a move.

As recently as two months ago, Transportation Secretary Pete Buttigieg said the the so-called vehicle-mile tax was under consideration in the Biden administration as a way for all motorists to pay for the upkeep of roads. The advantage of the VMT is that it would offset losses in the federal gas tax brought on by the growing sales of electric cars.

But the White House has since reversed course, saying it saying it would violate Biden’s pledge not to raise middle class taxes.