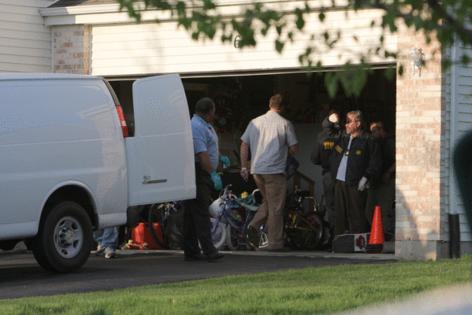 CHICAGO — Drew Peterson’s ex-fiancee says the former Bolingbrook police sergeant “got rid of” his fourth wife, Stacy Peterson, by putting her in a chokehold and stuffing her body into a blue barrel.

“He actually tried to show me the trick (of) how to snap someone’s neck within seconds,” Christina Raines said on Friday’s episode of the new Lifetime network series “Cellmate Secrets,” which was scheduled to air at 9 p.m. in Chicago.

Raines said she is sharing her “truth” for the first time — more than a decade after standing by Peterson on national television while he was under suspicion in the 2007 disappearance of Stacy Peterson and the 2004 death of his third wife, Kathleen Savio. “Cellmate Secrets” features interviews with Raines; her father, Ernest; and ex-girlfriend Nicole Speakman, who gives intimate details about the man she said called her “Babycakes” in jail letters.

The death of Savio, who was found drowned in an empty bathtub of her Bolingbrook home, was initially ruled an accident. It was reinvestigated after Stacy Peterson vanished 31/2 years later. Peterson was found guilty in 2012 of killing Savio. He has not been charged with a crime in regards to Stacy, who remains missing. He is the sole suspect, authorities have said.

In her new TV interview, Raines said Peterson admitted to her he killed Savio, and Stacy was his alibi that night. “It was a lot to take in. Stacy was pretty much trying to hold that over his head and tell on him,” Raines said. “He tried to reason with her, and she was not having it. And it wasn’t going to work.” She said Peterson drove Stacy’s body about two-and-a-half hours away to a place apparently known only to him.

In a statement to The Chicago Tribune, Peterson’s attorney, Steve Greenberg, called Raines an opportunist, who “apparently believes that each decade she should get her 15 minutes of fame. There’s not a ring of truth to anything she says about Stacy.”

Media reports at the time said Raines testified before a Will County grand jury, but she was not called as a witness in the Savio murder trial. “I’m not clear on exactly what was told to the grand jury,” “Cellmate Secrets” producer and field director Allison Willoughby told the Tribune. “I do know that at that time she was coming from a place of what she believed to be true. Over time, I believe maybe she’s formed new opinions and perspectives on the case and found new truths through those reflections.”

Raines, now in her mid-30s, said she met Peterson, now 67, as a teenager when she got in trouble for skipping school. They reconnected at a Naperville nightclub in 2008 with Raines moving into Peterson’s home by January 2009, per “Cellmate Secrets.”

In a February 2009 appearance on the “Today” show, Raines said she didn’t “believe that (Peterson) did anything wrong, and I love him. I have a lot of fun.” She looks uncomfortable watching that interview now on “Cellmate Secrets.” The Lifetime show provides snapshots of her journal entries, where Raines accuses Peterson of drugging her on their second date, spying on her and giving her jewelry worn by his former wives.

Peterson was charged with Savio’s murder in May 2009 and found guilty by a jury in September 2012. Raines said she last visited Peterson behind bars in February 2013 and still cares for him. Through her participation in “Cellmate Secrets,” Raines learned Peterson dated Speakman while in a relationship with her. Speakman said she was 23 years old when she met Peterson at a bar.

She said he denied killing his wives, though she got “goose bumps” when Peterson used past tense once when referring to his fourth wife. “Stacy had nice teeth,” she said he said. Speakman said she stuck by Peterson until he was charged in a murder-for-hire plot that targeted Will County State’s Attorney James Glasgow, who prosecuted him for Savio’s death.

Peterson’s conviction in that case means he will likely die in prison. He is serving time in an undisclosed state facility after being transferred from a federal prison in Terre Haute, Indiana, in 2019.

“Cellmate Secrets,” which is narrated by actress Angie Harmon and produced by AMS Pictures, premiered June 4 and airs at 9 p.m. Fridays. The six-episode docuseries re-examines the high-profile cases against Casey Anthony, Chris Watts, Susan Smith and others. Willoughby said the show’s team didn’t reach out to Peterson’s representation for comment. Those who were interviewed about Peterson were not paid for their participation, she said.

“My hope for this (Peterson) episode, along with all of the episodes in this series, is to humanize these individuals that have gotten caught in the path of these notorious criminals,” Willoughby said. “It really gives them a voice for the first time because prior to us, they’ve mostly been covered in not a great light for being involved with these individuals.”