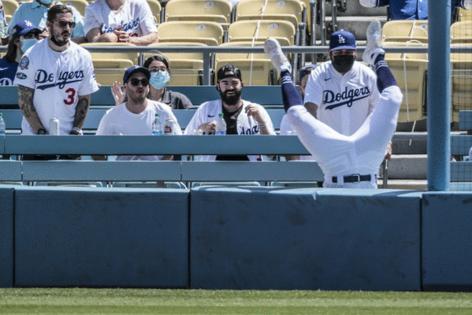 LOS ANGELES — As California’s businesses reopen, a majority of state residents are in support of allowing entertainment venues require proof that their patrons are vaccinated or have tested negative for COVID-19, and for some employers to require vaccinations of workers, according to a statewide poll conducted by the Institute of Governmental Studies at the University of California, Berkeley that was funded in part by the Los Angeles Times.

The survey of registered voters provides a snapshot of residents’ attitudes on COVID-19 vaccination verification issues about a month after officials announced reopening rules for indoor live events that allowed some businesses to demand vaccine “passports.”

But poll data also highlights a big partisan split and uncertainty intertwined with every new phase of the pandemic recovery.

“The findings show that even at this later stage, politics powerfully shapes the way that Californians think about vaccination and the reopening of society,” said G. Cristina Mora, co-director of the Berkeley institute.

The poll found that 63% of residents support concert venues, sports stadiums, cruise ships and casinos requiring proof of vaccination or a negative COVID test for entry. Among those who identified as Democrats, 82% approved; among those with no party preference, 67% approved; and among those who said they belonged to other parties, 37% approved. A majority of Republicans, 66%, disapproved.

A majority of respondents also supported allowing some employers to require workers to be vaccinated for COVID-19. Democrats ranked highest with 79%; Republicans ranked lowest at 33%. An overwhelming majority of those who identified as strongly liberal or somewhat liberal approved of this idea. Only 30% of those who identified as strongly conservative approved.

According to guidance by the U.S. Equal Employment Opportunity Commission, employers could require COVID-19 vaccinations if the need to have one is job-related or if remaining unvaccinated would pose a direct threat to other employees, customers or themselves. Religious beliefs and an established disability or medical condition are the main exceptions. In those cases, the business and employee must work together to find an alternative.

When health officials last month announced the reopening rules for live outdoor events, state Public Health Officer Dr. Tomás Aragón said it would “incentivize people to get the vaccine and to get it as soon as they can so they can return to some of their favorite activities.”

But these so-called passports have garnered an unexpected backlash from some of the same critics who protested against mask mandates.

Iran raised the possibility that talks to rescue its nuclear deal with world powers could extend beyond August, when President Hassan Rouhani is set to be replaced by a hard-line successor, urging the U.S. to take the “...Read More

Civilians in Afghanistan have taken up arms to push back against the Taliban as the militants fight for control of a crucial northern city and make deeper territorial inroads with the U.S. set to withdraw all troops by ...Read More

Top White House aides are set to meet with a group of senators trying come up with an infrastructure compromise as the effort moves closer to an agreement despite persistent differences on how to pay for the proposal.

MIAMI — Forecasters are monitoring a tropical wave that is approaching the Caribbean Sea and has a low chance of development this week.