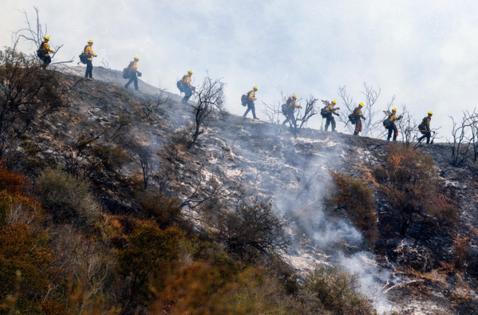 An image of a young man was sent on the Citizen personal safety app to users in the Los Angeles basin after a brush fire broke out late Friday night and quickly grew. The post labeled the man as an arson suspect and offered a $30,000 reward for information leading to an arrest in connection with the Pacific Palisades fire.

Within hours, the app’s million or so users saw the image, and tips poured in to authorities.

But there was one problem: The man was not the person identified by an LAPD helicopter pilot as the one seen igniting multiple fires that eventually swelled to consume more than 1,300 acres between Pacific Palisades and Topanga Canyon.

When Los Angeles County sheriff’s deputies caught up with the man in the photo — identified as Devin Hilton — late Saturday night, investigators quickly eliminated him as a suspect in connection with the growing blaze. Multiple law enforcement sources told The Times that the LAPD pilot informed investigators Hilton was not the man he had spotted on the ground Friday night, when the blaze ignited.

Citizen, which has been accused of sparking vigilantism in New York by encouraging users to capture recordings of crimes in progress, posted a photograph of the man it had obtained from private sources and offered a cash reward for information that led to his arrest.

The company said Sunday it made a mistake in posting the man’s image.

“We publicly posted the photo and offered a cash reward for information without formal coordination with the appropriate agencies. Once we realized this error, we immediately retracted the photo and reward offer. We are actively working to improve our internal processes to ensure this does not occur again. This was a mistake we are taking very seriously,” the company said.

Citizen has not identified the source of the photo it posted and said only that it came from a tipster. The company, which gathers information such as police scanner talk and alerts before sending notifications to users within a certain radius of an incident, said it did not formally corroborate the information with Los Angeles authorities.

In a briefing Monday, Los Angeles Fire Chief Ralph Terrazas said the actual suspect was arrested at 2:30 p.m. Sunday after investigators determined there were multiple points of origin for the fire. The man, who has not been identified by authorities, has been described to The Times by multiple sources as a person experiencing homelessness who set several fires in the area in a deliberate act of arson. He was being treated for minor smoke inhalation, authorities said.

Activists have long been concerned that data-driven applications like Citizen that provide brief suspect descriptions can highlight minorities as a source of crime and lead to racial profiling. Los Angeles County Sheriff’s Lt. James Braden told Spectrum News that the move by Citizen could have had potentially disastrous consequences for the man who was wrongly labeled.

Citizen has evolved during the COVID-19 pandemic. City and county officials have encouraged residents to download it as Los Angeles’ official contact tracing app, giving its popularity a massive boost. Citizen first appeared on the informational scene in L.A. in the spring of 2019.

“We provide real-time situational awareness,” Andrew Frame, Citizen’s founder and chief executive, said in an interview with The Times. “That empowers people. ... Once a citizen knows what the police are doing, it actually fosters trust.”

In the wake of the arson error, Citizen added to its statement Monday: “Ultimately, the safety of our users is always our top priority. With that in mind, we hold ourselves to the highest editorial standards. We have an extensive set of guidelines developed with feedback from seasoned professionals in media and law enforcement. We take great care to differentiate incidents and describe them accurately and objectively. Further, all user-generated content is monitored by a highly trained, 24/7 team of moderators.”