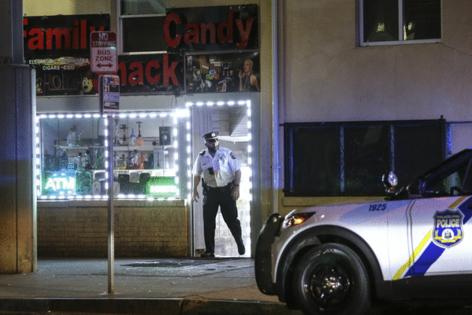 According to police reports covering Friday night into Sunday night, 15 people had been shot and eight stabbed, including one man at a city jail. The toll was expected to grow.

Officials have been at a loss to explain the surge in gun violence that has the city on track to exceed the all-time high in homicides recorded in 1990 — 500. The city finished last year one shy of that record. As of the end of last week, the total was just over 190, up nearly 40% over last year at this time.

The weekend contributed at least one more to that tally. At 9:48 p.m. Saturday, a 31-year-old man was shot in the head on the 7400 block of Fayette Street in East Mount Airy. He was pronounced dead at the scene. No arrests had been made.

Of the 15 reported shootings, two occurred Sunday. At 1 a.m. on the 300 block of East Tioga Street in Kensington a 20-year-old man was shot in the right leg and was in stable condition at St. Christopher's Hospital for Children, police said. And shortly after 5 p.m., a 37-year-old man was shot once in the upper back on the 1500 block of Pratt Street in Frankford. Police said he was in stable condition at Temple University Hospital.

The stabbings Sunday included one at 12:44 a.m. at the Riverside Correctional Facility on the 8100 block of State Road. Police said a man, 37, was stabbed multiple times and was in stable condition at Jefferson Torresdale Hospital. No other details were available.

In the other, a 53-year-old man was stabbed in the upper left arm by his 56-year-old girlfriend on the 3800 block of Parrish Street in West Philadelphia, according to police. The man was in critical condition at Penn Presbyterian Medical Center and the woman was in custody, police said.

Another disconcerting tally grew over the weekend: the number of shootings involving multiple victims. At 9:30 p.m. Friday, four people were shot inside a convenience store in the 5600 block of Market Street in West Philadelphia.

Last week, The Inquirer reported there had been eight shootings involving four or more victims, with a total of 42 people injured, as of Thursday, according to city data. That was up from two shootings with a combined nine victims at the same time last year.

Officer Miguel Torres, a spokesman for the Police Department, had no answers Sunday for the continued violence, just a wish: "We need to love each other and respect each other."