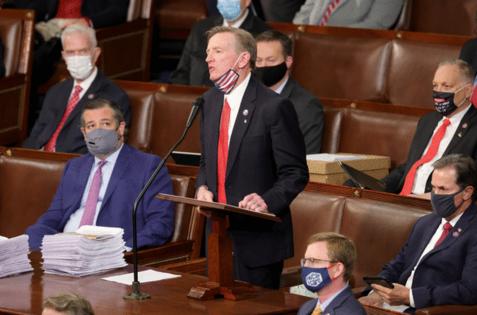 WASHINGTON — A U.S. House Democrat is laying the groundwork to reprimand three Republican colleagues, two of them from Georgia and one from Arizona, who made comments in recent days downplaying the Jan. 6 riot at the Capitol.

“These three members dangerously mischaracterized what happened that day and showed more sympathy for the domestic terrorists than the Capitol Police officers who died during the attack,” Cicilline wrote in his letter, first reported by The Hill.

Clyde and Hice said Friday that their comments were misconstrued.

Democrats have made other recent attempts to censure GOP members that have gone nowhere. U.S. Rep. Nikema Williams’ censure resolution against fellow Georgia U.S. Rep. Marjorie Taylor Greene has 46 co-sponsors but has not received a hearing in the three months since it was filed.

Cicilline’s letter came the same day House leaders reached a bipartisan agreement on a commission that will seek to determine the facts surrounding the Jan. 6 attack and what lessons can be learned. The 10-member committee will be evenly split between Republicans and Democrats and will have subpoena power. It is modeled after a similar commission formed in response to 9/11.

The House is expected to vote next week on a resolution to create the commission. Members will also be asked to vote on a separate bill to allocate $1.9 billion in emergency security funding as a response to the Jan. 6 assault.

The money would be used to fortify the Capitol complex and is based on recommendations from law enforcement. These dollars would also be used to reimburse the National Guard, to increase the overtime budget for Capitol Police and to cover expenses tied to prosecuting hundreds of people accused of participating in the breach.

The three lawmakers Cicilline has targeted for censure each made comments minimizing the effect of the attack during a Wednesday hearing on the Jan. 6 riot by the House Oversight Committee.

“There was no insurrection,” Clyde said at the meeting. “And to call it an insurrection, in my opinion, is a bold-faced lie. Watching the TV footage of those who entered the Capitol and walked through Statuary Hall showed people in an orderly fashion staying between the stanchions and ropes taking videos and pictures. You know, if you didn’t know the TV footage was a video from Jan. 6, you’d actually think it was a normal tourist visit.”