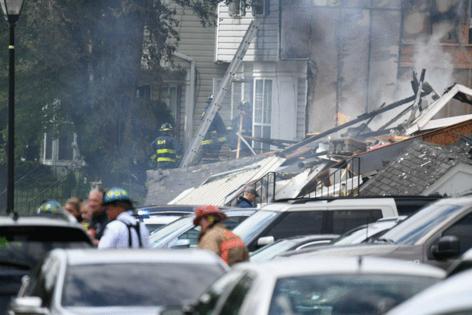 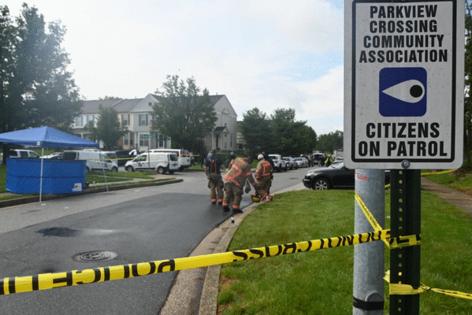 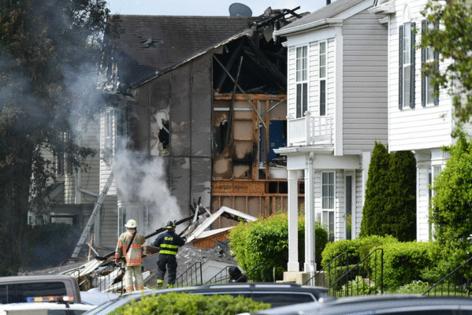 “My home & vehicle are continuously being searched by the Authorities,” one read as far back as 2008. “I have never been involved in Any Illegal activities. If you have any information, please Assist Them.”

Brown, who had peace orders filed against him, screamed from his porch through a bullhorn and would walk up and down the sidewalk with a rifle, one neighbor said. He once spent weeks standing in front of the U.S. District Court building on Lombard Street, demanding a stop to “harassment” by federal authorities. Other neighbors said he accused them of working with the FBI to spy on him.

The 56-year-old’s years of erratic behavior devolved into deadly violence early Saturday morning, when he killed three neighbors and was fatally shot by police after an explosion collapsed and burned his Parkview Crossing town house and an attached house in the 7500 block of Maury Road, officials said.

Four Baltimore County police officers fatally shot Brown after they were called just before 7 a.m. for a report of a fire and a gunman. The department on Saturday night identified Brown as the gunman who was killed. No officers were injured, and the department is reviewing body-camera footage of the incident.

Police have offered few details on the circumstances of the incident, which remains under investigation. No family members of Brown could be reached as of Saturday. The names of the other people killed had not been released as of Sunday afternoon.

Shireen Hodge, president of the Fair Brook Homeowners Association which supervises units in the area where Brown lived as well as a complex across the street, said Brown had a history of small disputes with neighbors.

For instance, Brown would sometimes park his car in a neighbor’s parking space, leaving his own vacant. Then, he wouldn’t allow any cars to park in his spot, arguing that it was his property. On at least one occasion, a neighbor called the police, Hodge said, and Brown agreed to move his vehicle.

“When he says he wants nobody on his property, he meant the grass cutters as well. So they had to cut around his grass,” Hodge said. “If you were walking in the community, and you got to his sidewalk, you would visibly see people stop, walk onto the street, walk around the car and then come back to the sidewalk — just so that they wouldn’t walk on his property.”

The disputes, however, never escalated further, Hodge said. She said American Community Management, a property management company based in Linthicum, would have kept records of the complaints, but that company did not immediately respond to a request for comment Sunday.

“There was a lot of that little contentious type behavior, but absolutely nothing of this magnitude ever. And I’ve been here 16 years,” Hodge said.

“It’s shocking, but then it’s not shocking. And I say that because this gentleman, he had all of the signs and symptoms of someone who was clearly suffering from some mental health issues,” Hodge said. “He had a huge sign in front of his house that said FBI, CIA and police are not welcome here.”

“I didn’t sleep well last night,” Hodge said Sunday. “Untreated mental illness is a very dangerous thing when you couple it with the effects of this pandemic.”

Brown didn’t just put signs up and yell at his neighbors about the alleged FBI harassment; he had posted on social media about being tracked by federal agents, too.

The Baltimore Sun visited his home in 2008, after Brown contacted a reporter saying his home was being repeatedly searched by police. Brown told the reporter he kept his home open so police don’t have to break anything to get inside.

Brown also unsuccessfully sued the Department of Justice in U.S. District Court in 2012, alleging the federal agency had been running surveillance on him for more than five years and had unlawfully denied a Freedom of Information Act request asking for records of said surveillance.

In the lawsuit, he alleged one of his neighbors threatened him with a knife and that the FBI was deploying aircraft to run continued surveillance on him.

In his decision to dismiss the suit in 2013, U.S. District Court Judge William Quarles Jr. wrote, “Brown’s videos of purported aerial surveillance by the FBI generally show only stars or other celestial bodies” and that Brown alleged in the videos that “the aircraft are pretending to be stars.”

On April 29, Brown made a post on Facebook that read, in part, “You’re not only searching my property you’re constantly attacking me. Many years ago I realized you were chemically attacking me to make me sleep, so you can freely search my home. For the past two years your chemical attacks has been constant.

“I own a quality constructed laptop bag that I hang from the ceiling at all times while I’m in my house because of your robotics that permanently occupies my dwelling. Your robotics has constantly attacked this bag not because its unable to access the locked zippers but due to its fear of being seen.”

Court records show peace orders were placed against him on March 29 and again on Wednesday.

Detola Laditan, whose parents have lived three doors down since 2005, said Brown had been “terrorizing the residents on the street” as long as they’ve lived there.

“Everybody knew something was going to happen,” said Laditan, who recalled Brown accusing him of spying on him. “Everybody lived in fear.”

Kweku Quansah, 51, said he heard an explosion and came outside to check what was going on. He said he saw his neighbor’s house on fire, then saw the gunman walking between cars firing shots.

“He was shooting toward us,” Quansah said. “And then I saw a lady on the ground. He turned and shot the lady again on the ground.”

Quansah said he has been a resident in the Parkview Crossing neighborhood for 23 years and said what took place Saturday morning was “not surprising” — it was just a matter of when.

Maryland passed an extreme risk gun law in 2018 that allows law enforcement, family members, cohabitants, intimate partners and medical professionals of those deemed to be a risk to themselves or others to petition for a court order temporarily taking away or banning them from purchasing firearms.

Maryland’s version of the “red flag law,” a term discouraged by mental health advocates due to its stigma, has been used far more than similar laws in most states that have implemented them in recent years.

State Del. Harry Bhandari, who got involved with the incidents after discovering a connection to one of the victims, said he’s not sure whether strengthening or better advertising the state’s red flag law would be the proper step. But the Democrat, who represents Maryland’s 8th District in Baltimore County, said he’s hoping to study legislative changes to stop similar tragedies.

County police said Sunday they are still investigating how Brown obtained the handgun he fired at his neighbors.

“[Saturday] night, I could not sleep for a while,” Bhandari said. “I was thinking: How we could prevent that incident happening?”