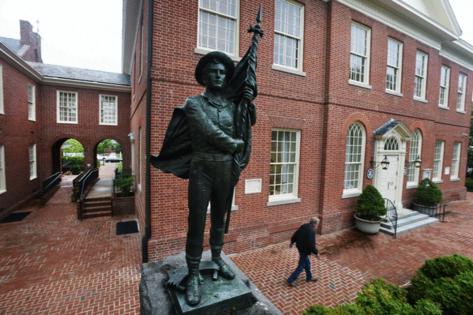 BALTIMORE — Maryland activists stepped up their efforts Wednesday to have removed what is believed to be the only Confederate statue still standing on public grounds in the state, filing a federal lawsuit arguing that the memorial on the lawn of an Eastern Shore courthouse is unconstitutional.

The complaint filed by the Talbot County Branch of the NAACP, the Maryland Office of the Public Defender and the state’s branch of the ACLU takes aim at the memorial to the “Talbot Boys” erected feet from the county courthouse entrance in Easton. It demands that Talbot County immediately remove the statue from its county seat and not keep the the statue anywhere else on public grounds, as well as monetary damages.

“Confederate monuments have no place in modern day America,” Richard Potter, president of the Talbot County NAACP, said in a statement released by the organizations who filed the complaint. “We are moving forward towards a State and Nation that finally achieves the inclusive manifestation of the same ideals in the Declaration of Independence. That means seeking justice and equality for all Americans.”

Talbot County Council President Charles F. “Chuck” Callahan, a Republican, said the county had yet to be served with the suit. He declined to comment further.

The suit follows efforts including rallies outside the site by the Move the Talbot Boys Confederate Monument Coalition, a group with as many as 500 members, to remove the statue. The bronze sculpture propped up on a granite base honors Talbot County residents who fought for the South during the Civil War, its chief figure a life-size figure of a young soldier with a Confederate flag.

Activists contend that it’s a symbol of white supremacy steps away from the halls of justice. As the lawsuit puts it, the courthouse is “a place that county citizens pay for and maintain with tax dollars, including the tax dollars of its Black citizens who are overtly denigrated and humiliated by the statue.”

Dan Wolff, one of the attorneys who filed the lawsuit, said in a statement the monument is designed to intimidate and violates a range of federal and state laws.

“With its Confederate soldier atop the pedestal staring down at all who enter the courthouse, it is an affront to all citizens of conscience, Black citizens especially. ... The Confederacy was composed of traitors to the country and defenders of white supremacy, and monuments glorifying its racist cause cannot be maintained by governments consistent with the U.S. Constitution and other laws,” Wolf said.

The lawsuit alleges the statue represents racial discrimination in violation of the Equal Protection Clause and violates fundamental rights established by the First and 14th amendments, the Civil Rights Act of 1964, other federal laws, and the Maryland Constitution and the Maryland Declaration of Rights.

To this day, white supremacists are known to brandish the Confederate flag in racist attacks, the lawsuit said, citing the murders at the Emanuel African Methodist Episcopal Church in Charleston in 2015, the attack in Charlottesville, Virginia, and the insurrection at the U.S. Capitol in January.

One group, Save the Talbot Boys, has consistently voiced support for the monument as an important piece of history and rallied support to preserve it as a local landmark. The group’s Facebook page has more than 1,500 followers; Talbot County has about 37,000 residents, about 81% of whom are white.

In addition to the organizations, the suit names as plaintiffs Potter and Kisha Petticolas, a Black attorney who works for the Easton public defender’s office. Petticolas said in a statement that she passes the statute every day walking into work at the courthouse, where she represent clients, some of whom are Black, who can’t afford attorneys.

The statue is a “constant” reminder of a time when white people fought to keep Black people enslaved, Petticolas said. “How can we keep this Confederate monument erected without promoting the same legacy of white supremacy? It cannot be done. How can any Black Marylanders expect justice at a courthouse that holds up a racist symbol on a pedestal for all to see?”

Talbot County, founded in 1662, established early roots in shipping, tobacco and slavery. The “Talbot Boys” statue is not far from where an auction black for slave was hosted in front of the courthouse.

“Officials from Talbot County would do well to learn, as Alexander Hamilton told us, ‘History has its eyes on you,’” Deborah Jeon, legal director for the Maryland branch of the ACLU, said in a statement. “The time is now to do the right thing, at long last, and take down this racist monument.”