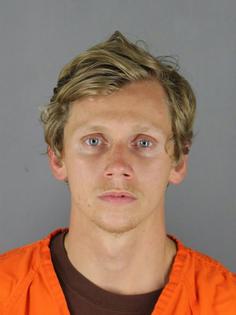 MINNEAPOLIS — A St. Paul man who helped burn down the Minneapolis Third Precinct headquarters and stole police weapons and other gear during last summer's riots was sentenced to 3 1/2 years in prison and ordered to pay $12 million in restitution this week.

Branden Michael Wolfe, 23, was among hundreds who gathered outside the south Minneapolis police station on May 28, three days after George Floyd was killed during an encounter with four Minneapolis police officers. The crowd tore down a fence surrounding the building and chanted, "Burn it down."

While others set a fire, Wolfe rolled a barrel into the police station with "the intent to accelerate" the blaze, according to court records. He also entered the building and stole a police vest, duty belt, handcuffs, earpiece, baton, knife, riot helmet, pistol magazine, police radio, police overdose kit, uniform name plates and ammunition, according to prosecutors.

"Mr. Wolfe furthered the destruction that took place in Minneapolis last summer by literally adding fuel to the fire," said Acting Minnesota U.S. Attorney Anders Folk, in a statement. "This sentence underscores the seriousness of Mr. Wolfe's actions and holds him to account."

Wolfe was arrested at his security job at Menards wearing the police security vest a week after the riots. He pleaded guilty in December in Minnesota U.S. District Court to one count or conspiracy to commit arson.

One of Wolfe's co-conspirators, Dylan Shakespeare Robinson, 23, was sentenced last week to four years in prison and $12 million in restitution. Two other men, Bryce Michael Williams, 27, and Davon De-Andre Turner, 25, have pleaded guilty to taking part in setting the police station on fire, and have not yet been sentenced.

The riots last summer in the aftermath of Floyd's death lasted several nights and ended after Gov. Tim Walz deployed the Minnesota National Guard. About 150 buildings sustained damage and dozens were burned to the ground. The burning of the precinct has become an enduring image of the week of protests and riots that resonated the world over.

LOS ANGELES — A small group converged Tuesday evening on the wide alleyway in downtown Los Angeles’ warehouse district. The young Black men and women filed out of cars and dapped and hugged the way you would any other ...Read More