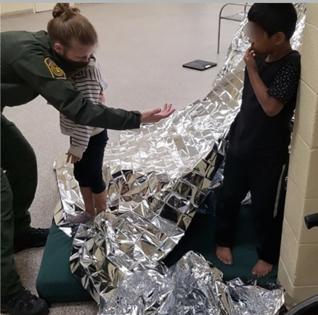 SAN DIEGO — Border Patrol agents rescued two children, a 5-year-old girl and her 6-year-old brother, after they were abandoned along the U.S.-Mexico border in southeastern San Diego County this week, officials said.

About 3 p.m. Monday, the agents spotted a man and a woman walking with the two children just south of the border near the community of Jacumba Hot Springs. The agents observed as the man and woman "hoisted" the children over large boulders in an area near the side of a mountain where the border wall ends, Supervisory Border Patrol Agent Jeff Stephenson said in a statement.

When agents arrived in the area, the children were alone and crying. They were unable to communicate with agents, except to provide their names, Stephenson said.

They were taken to a nearby Border Patrol station. There, the children handed over a handwritten note with their mother's name and phone number. The contact information also was written on their forearms, Stephenson said.

Agents contacted their mother and obtained additional information about the children, who were taken in by the Department of Health and Human Services' Office of Refugee Resettlement. Stephenson said the siblings are Mexican nationals.

He declined to provide other information about the case, saying the incident was under investigation.

"It is unconscionable that anyone would abandon these small children and those responsible for smuggling events like this will be aggressively prosecuted," Chief Patrol Agent Aaron Heitke said in a statement. "Thankfully, our agents were able to quickly rescue these siblings."

A similar incident happened last week when Border Patrol agents rescued two Ecuadorian sisters, ages 3 and 5, after suspected human smugglers dropped them over a 14-foot-tall border fence in New Mexico near El Paso, Texas. Video released by the agency shows a person atop the fence lower the girls before dropping them to the ground.

Both girls were checked out at a hospital before being released and placed in a Border Patrol temporary holding unit, officials said.

In response to an alarming, long-term increase in colorectal cancer among younger people, an influential federal panel on Tuesday lowered the recommended age to start screening from 50 to 45.

LOS ANGELES — Los Angeles Police Chief Michel Moore wants an officer to be fired for allegedly sharing a Valentine-style meme of George Floyd’s face and the phrase “You take my breath away.”

WASHINGTON — House Speaker Nancy Pelosi joined calls for a diplomatic boycott of the 2022 Winter Olympics scheduled to take place in Beijing in the latest sign of the growing bipartisan anger with China over human rights...Read More

AUSTIN, Texas — After debating the meaning of God's love, the Texas Senate voted along party lines to give final approval Tuesday to a bill that would ban gender-affirming medical care for transgender Texans who are 17 ...Read More

WASHINGTON — A trend of congressional Democrats becoming more willing to publicly criticize Israel became more pronounced over the past week even as the vacillating responses by senior party leaders underlined just how ...Read More

OAKLAND, Calif. — Two women were killed and at least three other women were wounded early Tuesday morning after someone opened fire on a party bus on an Oakland freeway, authorities said.