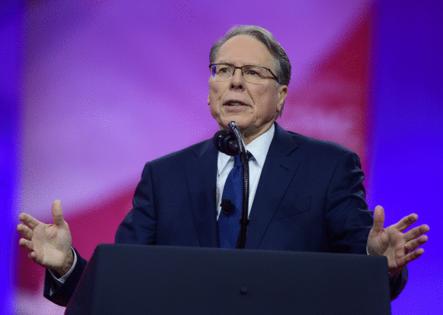 Testifying at a Texas bankruptcy court hearing convened as part of the pro-gun group’s effort to evade a move by New York officials to put it out of business, LaPierre said hunting water buffalo and elephants on the dime of NRA vendors was “all work.”

Among the allegations leveled in a lawsuit filed by New York Attorney General Letitia James is that LaPierre and other key players at the NRA used donor funds like a “piggy bank” to fund extravagant trips around the world, no-show contracts and a traveling “glam squad” of stylists for LaPierre’s wife, Susan.

One question from James Sheehan, chief of the AG’s charity bureau: Did LaPierre receive “free hunting trips including all expenses paid for by Under Wild Skies and other NRA vendors?”

“Yes. That was all work,” LaPierre replied.

“You received an elephant hunting trip in Africa with your spouse in 2014, correct?” Sheehan asked.

The NRA executive vice president — he is effectively the organization’s leader and reportedly draws a salary of nearly $1 million along with other compensation — stuttered when asked why his wife joined him on a water buffalo hunt in Botswana in 2014, explaining it was “part of projecting her image for the NRA.”

LaPierre spoke during the third day of a hearing in Texas federal bankruptcy court. The NRA filed for bankruptcy in Texas five months after James filed a suit in New York seeking the group’s dissolution.

LaPierre, appearing virtually for the proceedings, admitted he put the NRA into bankruptcy without consulting the majority of the group’s 76-member board.

MINNEAPOLIS — Unless one of them wins the lottery, the four men convicted of burning down Minneapolis' Third Precinct station are going to be paying off the bill from that night for the next 20 years.

PITTSBURGH — Restaurants and baseball parks aren’t the only ones returning to full capacity this summer. After a year of struggles, hardships and tough decisions brought on by the pandemic, tour buses are welcoming ...Read More

U.S. President Joe Biden’s point man for North Korea is set to hold talks with nuclear envoys from South Korea and Japan in a bit to build a united front pushing to end Pyongyang’s nuclear arsenal.

AUSTIN, Texas — To close out his latest statewide speaking tour, Beto O'Rourke hosted a rally at the Texas Capitol on Sunday to pressure Congress into taking action on voting rights legislation pending before the body.

Barnaby Joyce is Australia’s deputy prime minister for a second time after he was selected as leader of the Nationals, the junior partner in Prime Minister Scott Morrison’s coalition government.

A British man has died 15 months after first contracting COVID-19, his wife said.

Jason Kelk, 49, was hospitalized in Leeds in March 2020, according to The Guardian. However, he died Friday after he was transferred to a ...Read More