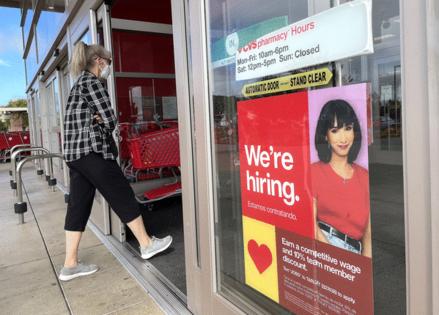 Applications for U.S. unemployment insurance dropped unexpectedly to a five-month low, led by a sizable decline in Michigan, suggesting robust demand for workers amid economic uncertainty.

Initial unemployment claims decreased by 16,000 to 193,000 in the week ended Sept. 24, after downward revision in the prior week, Labor Department data showed Thursday. The median estimate in a Bloomberg survey of economists called for 215,000 new applications.

In the decade that preceded the pandemic, initial claims averaged about 306,000 and rarely dipped under 200,000.

The four-week moving average, which smooths out volatility from week to week, fell for a fifth week to 207,000.

Jobless claims have remained at historically low levels in recent months as employers still try to fill millions of open positions while retaining the workers they already have. Half of Americans believe jobs were “plentiful” in September, according to data released Tuesday.

Still, hiring is expected to weaken as the Federal Reserve continues to aggressively raise interest rates in its effort to bring inflation down. The impact from the hikes, which have already sent borrowing costs soaring for houses and cars, will likely to work its way through the economy over the next few months and lead to higher unemployment.

“With labor still very hard to find, firms probably are holding on to people who under normal conditions would have been laid off,” Ian Shepherdson, chief economist at Pantheon Macroeconomics, said in a note. “At this point, then, the softening of the labor market which the Fed wants appears unlikely to come via rising layoffs.”

On an unadjusted basis, initial claims decreased more than 12,000 to 156,060 last week. Michigan posted the biggest decline with more than 5,600, reversing a large gain in the previous week that included layoffs in the manufacturing industry. New Jersey and New York also reported drops in claims.

A gap in the government’s two primary measures of U.S. economic activity during the first half of 2022 narrowed, pointing to a significant loss of momentum during the period, according to data also released Thursday.

In the mornings, Rosa Andresen showers hurriedly before her daughter wakes up, worried the 24-year-old might suffer a seizure or tumble out of the bed while she is still shampooing her hair.

The fastest commute to Manhattan by land, sea or air takes just 20 seconds to catch wind.

Atlanta has the highest income inequality among large U.S. cities, according to recent data from the United States Census Bureau. Driving much of Atlanta’s income inequality, experts say, is the city’s entrenched ...Read More

WORTHINGTON, Minnesota — In a basement office, across the street from the Casey's convenience store and just a block from the high school football field, a sign on the window for PSSI, a meatpacking janitorial service, ...Read More

U.S. trucking is entering a tumultuous period that will likely reshape the $875 billion industry.

Shipping rates that spiked during disruptions caused by the pandemic have plummeted — some are now calling it a “...Read More