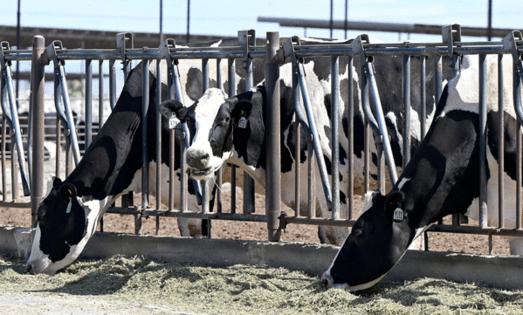 Last month, Northview Dairy in Ontario, California, sold nearly 3,000 cows to a farmer with properties in Kansas and Colorado. During a recent lunch break — after tearing down the rows of cow sheds that have paralleled a stretch of Haven Avenue for three decades — Northview dairy manager German Cisneros said the sale was the result of a combination of increasing regulations, high prices for cows, and a great offer from an Irvine company to turn the land into housing.

It makes perfect sense from a business perspective. But those former California cows are now residents of states with different air quality laws. And in the global effort to combat climate change by cleaning up dairy farming, that matters.

When Northview Dairy set up shop in the 1990s, there were an estimated 500 dairy farms housing some 400,000 cows in Chino and south Ontario, making the region one of the most concentrated places for milk production on the planet. Today, Cisneros said there are just 22 dairies left, surrounded by massive warehouse buildings and tract home communities with names like “Amberhill Farms.”

Many of the once-local cows have gone north to places like Bakersfield and the San Joaquin Valley, where land is cheaper and urban creep less intense. But, as with Northview’s herd, thousands of others have been shipped across state lines to dairies that don’t have to worry as much about rising costs, worsening water shortages and rigorous regulations around everything from animal welfare to air quality.

California has set the most ambitious goals in the nation for reducing methane emissions. These greenhouse gasses don’t stick around in the atmosphere nearly as long as carbon dioxide but are much more potent, which means they contribute significantly to global warming. And since dairies are responsible for more than half of the state’s methane emissions, legislators in 2016 set a goal to reduce emissions from farms by at least 40%, or some 9 million metric tons, by 2030.

Since passage of that law, the state’s 1,200 dairies have made huge strides in reducing methane emissions. A report this spring by the California Air Resources Board estimated state farms are nearly halfway to the goal.

But while half of those reductions have come from dairies changing they ways they process cow manure, the other half has come because California simply is losing cows. And when cows are moved, global methane emissions don’t actually drop. They just shift, or “leak,” into another state, where lighter regulations mean the greenhouse problems likely will get worse.

Many industry advocates fear that such leakage could get worse in the next couple of years.