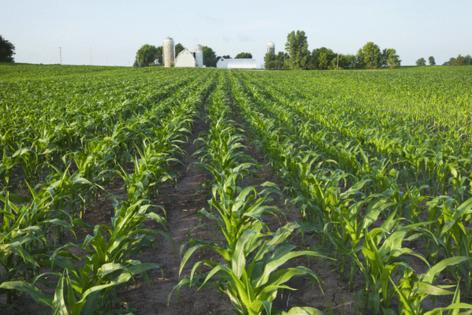 Corn growers — or anyone with a connection to the U.S. corn belt — knows the saying: Knee-high by the Fourth of July.

This sing-song expression for judging a crop's success is at least a century-and-a-half old. Over time, it has grown less accurate a measure with the advancement in seed genetics and a changing climate.

But the spring's soggy start may make the phrase relevant again this season.

"This year is the first year I can ever remember we won't have corn knee-high by the Fourth," said farmer Shayne Isane of rural Badger, Minn., just a few miles south of the Canadian border. "It's an old adage — as a lot of times we'll be waist-high or shoulder-high."

Much of Minnesota endured a dreary, wet and cold spring, keeping farmers to nervously pace living rooms, waiting for a chance to plant seeds.

According to data from the U.S. Department of Agriculture, 98% of the state's crop was finally in the ground by June 6 — about 20 days behind 2021. Such delayed plantings means the old-fashioned phrase will correctly match corn's height in some parts of the state.

"The early-planted corn is approaching chest high," said Prescher, who's been farming since the 1970s.

For many longtime farmers like Prescher, the old expression still invokes memories of their youth, the days of mechanical weeding and waiting for warmer soil temperatures.

The first reference to the phrase first appeared in archives of the Minneapolis Tribune, a Star Tribune predecessor, in 1867 — the paper's first year — when an Indiana correspondent commented on "knee-high" wheat evoking "the appearance of a green ocean."