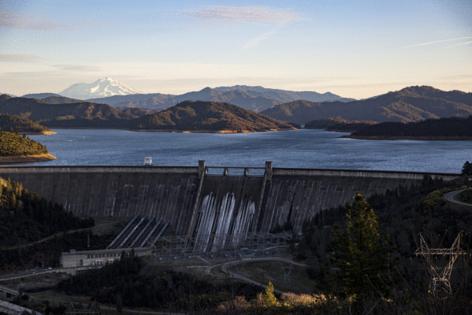 California faces the grim prospect of a drought-fueled summer of power shortages, hydroelectric plant shutdowns and rising electricity costs in areas that include the service territories of PG&E and other utilities, a report released Friday warns.

The drought could deplete big reservoirs in California such as Shasta Lake and Lake Oroville to the extent that the hydroelectric plants at those sites might have to suspend operations, according to the new report from the U.S. Energy Information Administration, or EIA.

The forbidding electricity scenarios have surfaced due to an alarming drop in water levels at reservoirs throughout California, including the ones with hydroelectric plants.

“During drought years with lower-than-average storage levels, releasing water from storage increases the possibility that the reservoir water level will drop to a point at which hydroelectric generation is no longer feasible because the water level is lower than the point of entry into the facility,” the federal energy information agency stated.

The scenario of the shutdown of a huge hydroelectric plant isn’t merely something that happened in a long-gone past, either.

“This situation occurred in late 2021 at Lake Oroville,” the EIA report stated. “During the summer of 2021, the Oroville reservoir was drained to the point that the adjacent hydropower plant, Edward C. Hyatt, had to go offline due to drought conditions for the first time since it started operations in the 1940s.”

Plus, California has altered the mix of its power supplies lately, according to the federal agency.

“In recent years, California has shifted toward more solar and wind energy resources for electric power generation and away from natural gas power plants,” the EIA reported.

Since 2015, 58% of steam turbine natural gas units located in California have been retired, a reduction of 6,500 megawatts of electricity, the federal agency stated. Over the same period, solar capacity has increased by 8,800 megawatts.

Other states might not be able to ride to California’s rescue, however. The drought has scorched neighboring states as well, which might mean they might have to cling to their own electricity supplies rather than export the power to an energy-hungry California.

Hydroelectricity is deemed to be cheaper and more flexible than other sources such as natural gas. This could force California into increased reliance on non-hydro sources or suppliers from outside of the Golden State. That, in turn, may trigger spikes in power costs. Put another way, non-hydro sources might be scarcer and more expensive.

“Our analysis showed that all summer electricity prices in California increase under a drought scenario,” the federal agency stated in its report.

To help alleviate the potential shortage of electricity, Gov. Gavin Newsom and PG&E are exploring ways to keep the vast Diablo Canyon nuclear power plant perched on a scenic stretch of the California coast in San Luis Obispo County operating beyond a scheduled shutdown date of 2025.

Hydroelectric plants might be able to provide only 8% of California’s electricity requirements this summer, about half of their typical share of 15%, the federal agency warned.

Peak prices for electricity could hop 7% higher this summer in Northern California, according to the report.

“The reduction in hydroelectric generation will alter the generation mix in California, resulting in an increase in wholesale power prices in the West and higher carbon emissions,” the federal agency reported.

The Inflation Reduction Act signed by President Biden this week aims to shift America toward a greener future by lowering the cost of electric vehicles, energy-efficient appliances and rooftop solar panels.