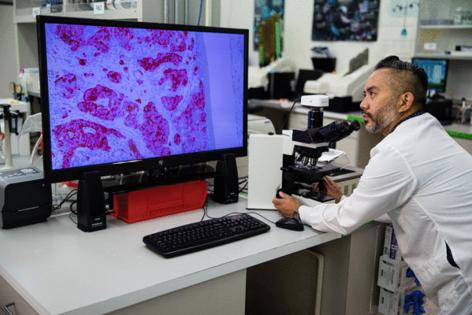 A century ago, type 1 diabetes was a death sentence. But San Diego biotech ViaCyte says two studies published this week show the company is getting closer to what it calls a "functional cure" for the disease.

The pair of studies, published last week, are based on an early-stage clinical trial in which the company implanted small devices beneath the skin of type 1 diabetics. These devices were loaded with pancreatic cells, which researchers showed could grow into cell types that naturally keep your blood sugar from dipping too low or suddenly spiking.

The hope is that this approach, known as cell replacement therapy, could allow type 1 diabetics to ditch the needles, syringes and pumps they use to constantly monitor their blood sugar. But first, the reported findings, based on the first batch of patients to join an ongoing study, must hold up as the trial expands and in follow-up trials. And ViaCyte is still tinkering with its device to trigger insulin production more consistently and robustly.

Still, the latest findings are sparking genuine optimism from a company that's run into numerous twists and turns in its quest to treat what remains a difficult and devastating disease.

"The cells that we are implanting actually work — they secrete insulin," said Dr. Howard Foyt, ViaCyte's chief medical officer. "We've done it already. So it's just a question of being able to reproduce those results in a greater number of patients."

The recent studies come about a month after Vertex, a Massachusetts biotech company, also announced that it has made progress toward a cell-based therapy for type 1 diabetes.

It's all part of an effort to help those struggling with a disease that affects 1.6 million Americans, according to the Juvenile Diabetes Research Foundation. Type 1 diabetics often suffer from constant exhaustion, weight loss and increased thirst and urination, among other symptoms.

Things can get worse without treatment, leading to heart, kidney and nerve damage. A second-century Greek physician once described diabetes as "the melting down of flesh and limbs into urine."

At the source of these patients' woes is friendly fire from their own immune systems, which wipe out the cells in the pancreas that make insulin, a hormone that regulates blood sugar levels. And while type 1 diabetics can inject themselves with insulin and use glucose monitors to track their blood sugar, these fixes are expensive and not always effective.

ViaCyte is betting that replenishing these lost cells would be a more lasting solution. Researchers have known for about 20 years that transplanting pancreatic cells from organ donors can trigger insulin production, but there's not enough donor tissue to keep pace with demand. So the biotech is using stem cells, which can be grown in bulk and coaxed to form virtually any of the body's cells.